The impact of the generous estate gift of Ball State alumnus Wally Miller, accepted by the university in 2003, continues to grow 10 years later. While the most visible result has been naming the Miller College of Business in his honor, the gift also established the Phyllis A. Miller Professorship in Health Economics and provided the resources necessary to recruit nationally recognized faculty and establish a research agenda focused on the economics of health care.

Under the leadership of Rajib Sanyal, dean of Miller College, a university-wide task force proposed in 2009 that Ball State explore a collaborative, interdisciplinary approach.

“At that time, the university had many independent health-related faculty and programs ranging from economics to nursing and from human performance to architecture, among many others,” Sanyal says. 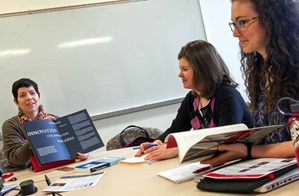 The task force recommendations were presented to university’s senior leadership, and President Jo Ann M. Gora approved the establishment of the Global Health Institute (GHI) at Ball State. In August 2010, Kerry Anne McGeary joined the faculty as the Phyllis A. Miller professor in health economics and director of the institute. McGeary is a nationally recognized economist, with research focuses on health economics, health policy, and health services. She earned her PhD from Penn State University and was an assistant professor at Drexel University and the University of Miami.

GHI examines various issues related to the function of health care systems and the promotion of public and community health. Its mission is to encourage interdisciplinary investigation of critical issues that impact local and global health. Tenet to this mission was the creation of a faculty fellow.

When the GHI speaks of “global” health, it is speaking to more than one designation of global.

“We view health as a global concept, looking at mental as well as physical health, health risks, treatment, prevention, and so on,” says McGeary. “Many of our fellows are also involved in internationally focused health projects.

”By representing six of Ball State’s seven academic colleges, the faculty fellows and affiliated members, advance a cross-pollination of research interests and ideas.

“In my field – economics – most studies are both intra- and interdisciplinary,” says McGeary. “Likewise, in health, you need multiple specialties and fields to allow that study to succeed. Almost nothing about health research is singular-faceted. Large projects – and large grants – require that cross-section.”

By establishing the Global Health Institute, Ball State has created an important tool for the university’s research community, as well as a source of information on health-related issues impacting the citizens of Indiana. Since October 2011, GHI has produced six Burden of Disease reports, addressing major health issues in the state, including the impact of obesity, smoking, diabetes, and alcohol use on adults in Indiana. McGeary and her graduate assistants have examined a wide array of health issues and discovered that different populations in Indiana are affected by different health issues. For instance, “we found that the Hispanic population of Indiana is more likely to be affected by asthma,” says McGeary.

GHI offers unique opportunities to Ball State faculty. “The biggest thing they have done is come together and start working together,” says Robert Morris, associate provost for research and dean of the Graduate School. “They are creating a core structure that allows for a great interdisciplinary approach to health. They bring a portal for people who are interested in health-related policies, studies, and wellness to come together and work as a team.” 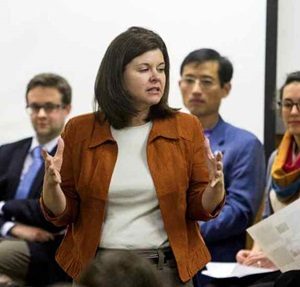 According to Carolyn Shue, GHI fellow and associate professor of communication studies, the appeal of working with GHI is that it offers faculty an opportunity to meet potential interdisciplinary partners.

“Oftentimes, we get caught up in our own colleges and departments,” she says. “The value of the interdisciplinary centers on campus is that they allow for dialogue across disciplines and promote the collaboration that faculty oftentimes miss out on when they are working on the day-to-day tasks of their colleges.”

“GHI has seen many opportunities for external funding to support health studies,” Sanyal says. “Health care is a big part of our economy. There are many agencies – both private and public – that study health care issues and fund studies and research, there are many health-related firms in the region, and there are many successful Ball State alumni in the health sector.”

Jagdish Khubchandani, GHI fellow and assistant professor of community health education, received funding from the National Institute of Diabetes and Digestive and Kidney Diseases (NIDDK), for research associated with the Short-Term Education Program for Underrepresented Persons (STEP-UP). Khubchandani and student Emily Miller are using the National Health Interview Survey to assess the correlates of diabetes in minority adults. Khubchandani and Miller presented their research at the NIDDK/STEP-UP conference in Boston on August 8, 2012.

“Preliminary findings suggest that diabetes outcomes and its effects are worst in African-Americans nationally as compared to white diabetics and diabetics of other racial/ethnic groups,” said Khubchandani. “African-American adults with diabetes are more likely to be males, unemployed, and smokers. They are also the most likely to have mental health issues and other chronic diseases, such as hypertension, cancer, heart disease, and kidney disorders. In addition, African-American adults who have diabetes are the most likely to skip medication and have no access to care when needed for diabetes-associated complications.”

Bringing her brand of research to GHI, McGeary, funded by the National Institute on Alcohol Abuse and Alcoholism, has been examining several aspects of alcohol use and problems. Her study, “Quality Substitution among Heavy and AUD Drinkers and Alcohol Tax Policy,” uses detailed alcohol price data linked to detailed nationally representative alcohol consumption data. McGeary was also commissioned by Community Hospital East to conduct a detailed analysis of the hospital’s economic impact on the eastside of Indianapolis as well as information on its benefits and services to the immediate area.

In addition to the grants the institute has received, it is actively pursuing opportunities from national funding sources for numerous collaborative, interdisciplinary projects. The proposals, totaling more than $1 million, have been submitted to the National Institutes of Health, the Network on Inequality, Complexity & Health, the Robert Wood Johnson Foundation, and the William T. Grant Foundation.

The benefit of the GHI is also realized by the faculty who serve as fellows. It allows the professors to stay fresh, says Erik Nesson, GHI Fellow and assistant professor of economics.

“When you’re doing research, it keeps you abreast of what is going on in your field and that helps you keep your courses up to date,” he says. “I can use the Burden of Disease reports, which give me real statistics and examples to use in my classes. It’s something Ball State does, it’s relevant to Indiana, and it’s something the students can relate to.”

Ball State students also have benefitted from the institute and the opportunity to participate in research studies. 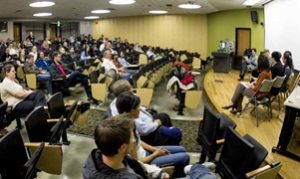 “Our students, particularly our graduate assistants, are given the opportunity to do applied research. We are thrilled to have them and their work,” McGeary says. “The very nature of our work allows them to think outside of the box about what will develop their skill sets.”

On March 14, 2013, the Global Health Institute and the Office of Institutional Diversity (OID) hosted an interdisciplinary panel of health disparities. This panel, moderated by McGeary, included students and faculty from disciplines across campus, including urban planning, wellness and gerontology, and physiology and health science.

“The benefit of the panel was to discuss the importance of an interdisciplinary approach to the issue of health disparities,” says McGeary. “This is the first time that OID cosponsored a panel with another group on campus.”

“There was a diffuseness of our health efforts on campus,” says Morris. “Until GHI, there was little design to bring them together. They’re doing great work, especially since they’re really just getting started, and they are really making their footprint on campus. We are still looking at how best to aggregate our strengths from across campus, not just in health – but in a variety of areas. The success of GHI is a great testament to the power of collaborative work.”

As GHI looks to the future, it hopes to be able to conduct new, larger studies but also that the impact of previous projects will continue to spread.

“Our projects have a lot of possibilities,” says McGeary. “The Burden of Disease reports have received a lot of media coverage and have appeared in Associated Press articles across the country. Our research and our name are bringing national recognition to Ball State University.”