MyIGA AppThe app for the Indiana legislature displays the day’s meetings on the first day of the 2013 legislative session for the House of Representatives.
It all started with the Chirper. Created in 2008, the Chirper, which lets fans at Ball State sporting events produce chirps with their smartphones to cheer on the Cardinals, was the first mobile app produced by Emerging Technologies and Media Development. 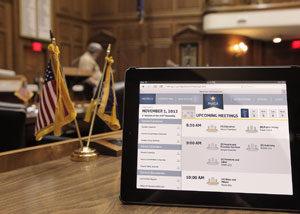 The app for the Indiana legislature displays the day’s meetings on the first day of the 2013 legislative session for the House of Representatives.

(ETMD). ETMD explores disruptive innovations, like the Chirper app, to find practical applications for academics, research, and business. After the creation of this quirky app, Jonathan Huer, director of ETMD, and his students turned their attention to more practical app development.

In January 2011, the Ball State University Board of Trustees was approached by Philip Repp, vice president of information technology, with a recommendation that the trustees pursue a paperless format and use tablets for their meetings. Huer and his Digital Corps students assessed the available options, selected the app, and assisted the trustees with the switch from paper to tablet.

The move from paper to tablet demonstrates Ball State’s continued commitment to sustainability as the extensive amount of printed documents traditionally used for board business has been eliminated. The app used by the Ball State trustees provides online access to all documents, in a searchable format. This gives the trustees quick and easy access to the numerous materials they must review in their governing capacity with the university.

The efforts of Huer and the Digital Corps are also making an impact on the state of Indiana, as they have worked with legislative committees in the Statehouse to reduce the amount of paper they use. An initial pilot project with one committee from both the House and Senate was expanded to four additional committees in the fall of 2012. For the most recent project, the group actually developed the app that allows lawmakers to view all legislation, follow updates, and watch committee hearings and sessions from an iPad or other mobile tablet.

The app actually keeps track of the amount of paper saved and then translates that into dollar amounts. “But no matter how you cut it, buying an iPad is cheaper,” says Huer.

However, there are larger benefits than monetary savings. “When state representatives go out to meet with their constituents, they cannot carry every bill with them, and there are so many amendments and versions and so on. The beauty of the iPad is you have instantaneous access to every single legislative document. You can search them. You can track them. We’ve created a system where you can mark bills you’re interested in, so you are proactively notified whenever changes happen. So now when they go to meet with their constituents, they have the full volume of data on hand.

“One of the fascinating things about this project is that it’s been characterized as a public-public partnership. There are obviously a lot of opinions about education and education funding. With a lot of the debate around higher education funding, this is the perfect example of why funding education is important and of the type of transformative education that Ball State provides.”

Another benefit: improved accuracy. For example, the Student Recreation and Wellness Center is using iPads rather than clipboards to track facility use. Not only is it easier and more efficient than paper and pencil, the center’s database is updated instantly and the risk of error from manually inputting data has been eliminated.

“One of the things that I try to tell students is that people always see the big things, but it’s the little things that you do every single day that make the big things seem easy to us but maybe seem impossible to people on the outside,” says Huer. “This has been a long progression, which can be traced back to the creation of the Chirper app we made just for fun.”

John Strauss, instructor in Ball State’s Department of Journalism, covered major felony trials and civil litigation while serving as an AP correspondent and editor in Indiana, Tennessee, Kentucky, and New York City. He is now sharing his expertise in the classroom with the next generation of journalists.

Since 2008, Strauss has taken students from his NEWS 221 Journalistic Storytelling class to meet Judge Marianne Vorhees at her courtroom in Delaware County Circuit Court 1 and give them a chance to find out how the court operates. From their relationship, Vorhees has become engaged with Strauss’ most recent project to bring social media to the Indiana courts.

“Citizens are very interested in what happens in their local courts,” said Strauss. “Most people get their knowledge of our justice system from the news media. And with cutbacks in the newspaper industry, often the only cases reported involve the most heinous or outrageous crimes.”

In the spring 2013 semester, Strauss directed an immersive learning project that studied the issues around public engagement by the courts and worked with judges and court staff to develop possible solutions. 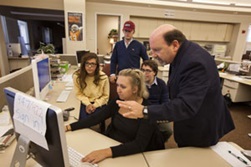 Strauss works with his student team on their Twitter project for the Delaware County Courts.

“Our goal is to help county courts in Indiana by developing some basic tools and techniques for social media publishing,” says Strauss. “This will allow them to help the public with things like information about jury service, helping self-represented litigants understand the system, and increasing awareness of the court system as a whole.” The hope is that this project will help to supplement the gaps in information for citizens.

“The point of the courts Twitter feed isn’t to comment on cases – something judges don’t do. Instead, the feed includes the text of sentencing orders, details of the court schedules, updates on trials – word of a verdict, for instance. And of course as with other Twitter feeds, the courts will retweet items of interest including the Indiana Supreme Court, the American Bar Association, media reports on cases, and tweets from prominent national courts reporters.”

Supported by a grant from the Indiana Supreme Court, Strauss and his students have created a Twitter feed of @DelawareCoCrts for the Delaware County Courts. This local project has the potential to serve as a template for county courts across the state of Indiana to implement at low or no cost to the courts, with minimal time commitment from the judge and court personnel.

The hope is that the Twitter feed template will prove to be just the beginning of greater interaction between the courts and the public. Eventually, perhaps, they will move to Facebook and possibly even a court-based app.

“What’s really exciting about what’s happening at Ball State is there’s this distinctive focus on emerging media that brings solutions to problems people didn’t know they had. Looking at problems in new ways allows for benefits for the public,” says Strauss.

Bagga Book to AppA rendering of how the American Government mobile textbook will look when its supplemental smartphone app is complete. Jay Bagga, professor of computer science, is no stranger to app development, especially educational apps. 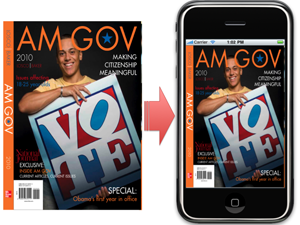 A rendering of how the American Government mobile textbook will look when its supplemental smartphone app is complete.

In 2009, Bagga and Vinayak Tanksale, his colleague in computer science, received an Emerging Media Initiative Grant from Ball State. Their partnership has led to three apps.

CHEM EQ was developed for high school and undergraduate college students and presents chemical equations in a game format, with three levels of difficulty. CHEM EQ was the first app developed by Ball State faculty to be accepted by the Apple App Store.

Bagga’s other work includes a graph theory app, which he uses as the basis for developing similar apps in his classes, and a supplemental app, still in development, for the textbook American Government by Joseph Losco, chair of the Department of Political Science, and Ralph Baker, professor emeritus of political science.

In 2010, the Vietnam Education Foundation, impressed by Bagga’s research and app development knowledge, encouraged him to apply for the U.S. Faculty Scholar grant. He has received the grant for three consecutive years (2011, 2012, 2013).

Through this program, Bagga has worked with the Vietnam National University at the University of Engineering and Technology in Hanoi. For the initial year of the project, he taught graduate courses on graph theory, algorithms, and iPhone app development. In 2012, Bagga worked with undergraduate students, teaching design and analysis of algorithms and developing Android apps. In the fall of 2013, he taught an upper level course in theory of computation.

Bagga travels to Hanoi twice per semester, teaching the first and last week of the semester in the classroom. The remainder of the sessions are conducted through video conferencing, which allows for interaction between the Vietnamese and Ball State students. The grant also covered the cost of textbooks and computers in Vietnam and in 2013 provided funds for a graduate assistant at Ball State and the Vietnamese institutions.

“It is truly an international experience, which the Vietnamese university welcomes because the students are exposed to the American pedagogical methods,” says Bagga. “And that’s why they keep asking me to come back, providing accommodations, and supporting these courses.”

“These are educational apps that I plan to use in future classes. There are several apps in graph algorithms as well as apps in other applied algorithms such as sorting,” says Bagga. “Several of the graph algorithms were combined into a single app that was presented at the 2013 Ball State Student Symposium by graduate student David Barnard. This app is nearing completion, and I plan to publish it on Google Play. I’ll also use this educational app in my future classes and will continue to add more features to it.”

While these courses were under way, Bagga was also conducting research with his new colleagues in Vietnam and attending conferences there. This exchange idea culminated in Ball State hosting Hieu Dinh Vo as a visiting scholar from Vietnam for two weeks in February 2013. “He attended our classes, experienced our teaching and pedagogical methods, and visited our labs,” says Bagga.

The exchange continues, as Vietnam National University is hoping to start a professional research journal in computer science and has asked Bagga to assist with its inception and be a part of the editorial board.