To encounter Ball State’s Department of Anthropology is to uncover a treasure of rich and diverse opportunities for discovery. Dedicated to the study of humankind throughout history, the faculty, staff, and students in anthropology invariably have their sleeves rolled up and are actively inquiring into the human condition.

Nowhere is this engagement more evident than with the department’s leadership within the Applied Archaeology Laboratories (AAL). Together Mark Hill, Kevin Nolan, and Christine Keller lead the charge for research of prehistoric and historic peoples as evidenced by their material remains.

“What makes the Applied Archaeology Laboratories unique is that the lab is dependent on this student involvement, their participation, their ideas, and their suggestions,” says Keller.

In 1978, the Department of Anthropology established a laboratory where students could immerse themselves in the study and practice of archaeology. Since then, the Applied Archaeology Laboratories (formerly Archaeological Resource Management Services) has been involved in more than 3,000 archaeological surveys and special projects. In the 2010-2011 academic year alone, it received 37 external contracts and grants, totaling roughly $200,000.

In 2010, the lab made a shift to involve students in a more profound capacity. Today, the lab has approximately 40 students involved in projects, not including volunteers and interns. Between fall 2010 and summer 2011, these students logged more than 10,000 hours of work. “Students are not just learning in the classroom but also in real-world experiences,” says Hill.

One project, made possible by the Historic Preservation Fund, National Park Service, and the Indiana Department of Natural Resources, awarded nearly $50,000 for the lab to conduct pedestrian surveys in Blackford County, Indiana. Here, AAL conducted a phase 1 reconnaissance project, surveying fields in search of archaeological sites, which can contain single or multiple prehistoric or historic artifacts. They then analyze the sites and artifacts to understand and interpret the cultural chronology of the county, i.e. when people (especially prehistoric) lived in the county and in what general places.

Led by Hill, Keller, and Mark Groover, students were also involved in a project in Fort Recovery, Ohio, funded by the National Park Service American Battlefield Protection Program, which concluded in December 2011. Part of this endeavor was to delineate more clearly and accurately the boundaries of the Battle of the Wabash (1791) and the Battle of Fort Recovery (1794). The researchers were also working to diminish threats to the battlefields through public education and involvement.

Outside of research, staff and students of the lab are also involved in public outreach, seeking to educate communities about the importance of archaeology and preservation. Nearly 400 community members attended their outreach events in the fall of 2011.

For example, AAL’s public archaeology interns organized events for Mounds State Park in Anderson, Indiana, in September 2011, as part of Indiana’s Archaeology Month. Events included excavation of three test units with participation from the public, hands-on artifacts, and displays of the latest AAL projects. AAL interns also conducted interviews with visitors to understand why Mounds State Park was important to them and the community.

Students appreciate their role in the process. 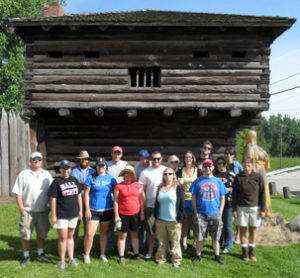 “The AAL staff don’t put themselves above everyone else,” says Tyler Wolford, ’12. “If you, as a student, have an opinion, or an idea, or if you put something forward for a project, it is valued. I think that is really important.”

The lab is able to offer graduate assistantships through some of the grants it has received, which is a useful tool in bringing in new students. Once they are in AAL, they are able to connect with professors who have similar research interests, can facilitate connections with fellow professionals across the country and around the world, and are personally invested in the students and seeing them go on in the field.

“They really go out of their way to help you get published or to move forward in your career path,” says master’s student Joseph Miller.

“The leadership in the lab is phenomenal,” says master’s student Mary Farrell. “They are so busy but always helpful. I can go to them with a question anytime. They are very patient, and they explain things. It’s an amazing environment to work in.”