What is of human derivation, reflective of the richness of a culture, often elusive—not recorded, and according to the National Geographic Society’s Enduring Voices Project, disappearing at the rate of one every 14 days? The endangered languages of our planet. 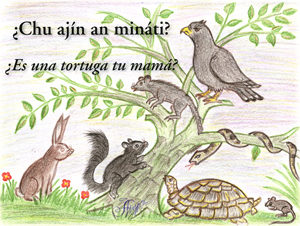 The survival of languages, which allow us rare and fragile glimpses into a culture, is dependent on linguists working to preserve them. Carolyn MacKay and Frank Trechsel professors in the Department of English, are doing just that.

“Language encodes all sorts of cultural knowledge. It includes songs, stories, origin myths, and all sorts of vocabulary that is unique to a specific town, ecosystem, and environment,” says MacKay.

“All of that information about the culture is tied up in the language. You cannot really study another culture through translation because it is the original language that reveals the culture. From the community standpoint, loss of a native language very frequently entails loss of native culture as well.” MacKay began her research on endangered languages during her master’s work at the Universidad de las Américas in Cholula, Mexico. She then pursued a doctorate in linguistics at the University of Texas, where she first began her research on the Mexican Indian languages—Misantla Totonac and Pisaflores Tepehua. Trechsel began working on indigenous languages of the Americas with research on Quiche Maya, the subject of his University of Texas dissertation.

Since 1988, MacKay and Trechsel have been working together to produce materials that will help native speakers of Totonac and Tepehua languages maintain their language and culture.

This process of language documentation and preservation is laborious. Since 1999, MacKay and Trechsel have spent every summer in Puebla and Veracruz, Mexico, compiling vocabulary and phrase lists and recording as much about the languages as possible.

After several weeks of recording, they begin the arduous task of data transcription and analysis. They estimate that, for every 10 minutes of oral recording, it takes roughly six hours working with native speakers to transcribe it accurately and completely. 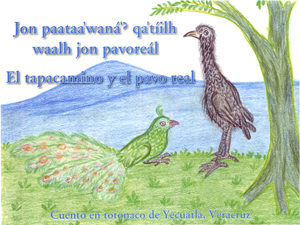 “These are unwritten languages, many of which haven’t been described or documented at all,” says Trechsel. “Several of them are endangered in the sense that this is probably the last generation of native speakers. We’re trying to produce materials that will encourage the members of these communities to preserve and maintain their languages for future generations.”

Through the production of bilingual Totonac-Spanish and Tepehua-Spanish children’s books, MacKay and Trechsel have been able to share their work with the communities where these languages are spoken. They have focused on publishing traditional stories and folktales and have developed orthographies in both languages for practical and educational use. One of their primary language consultants in Pisaflores, Agustín Santiago Cuervo, provided the color illustrations. To date, five children’s books have been produced and are being employed in both homes and schools in the communities of Yecuatla and Pisaflores, Veracruz:

MacKay and Trechsel’s interest in this research is twofold. First, there is a scientific aspect. As they point out, language preservation is important for much the same reason that species preservation is: Languages, like species, are unique, and if they are not preserved and maintained, they will likely disappear forever. According to MacKay, linguists predict that as many as 90 percent of the world’s languages will no longer be spoken in 100 years. This represents a huge loss in linguistic and cultural diversity. Second, there is also the hope that the study and documentation of these languages will aid in the reconstruction of Meso-American prehistory. MacKay and Trechsel’s research is supported with grant awards from such agencies and institutions as the National Science Foundation, the National Endowment for the Humanities, the Endangered Language Fund, and the Alice Cozzi Heritage Language Foundation. 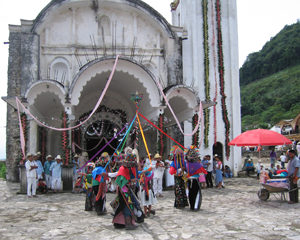 “The funding enables us to get to Mexico and back—as well as to pay the consultants and purchase the equipment that we need to conduct this research,” says Trechsel. “We are very grateful to the various granting organizations that have helped us over the years. We’ve also received a number of internal grants from Ball State that have helped us to travel and to publish the children’s books.”

Establishing a personal connection with those communities has been a reward in itself. The people have shown great kindness and patience as they are asked to repeat words dozens of times so that MacKay and Trechsel can better decipher the subtle differences in the consonants and vowels.

“They have been absolutely wonderful. They’ve taken us into their homes. They’ve fed us. They’ve been just lovely,” says MacKay.