Mark Pyron, professor of biology, is what you might call a bit of a fish enthusiast. 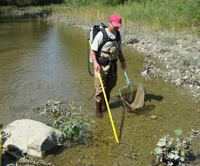 Casting a wide net in the area of ichthyology (fish research), Pyron received his bachelor’s in zoology from the University of Wisconsin, where he conducted fish and ecological research. While earning a master’s degree at the University of North Texas, his work was focused on fish toxicology and behavior. His doctoral work at the University of Oklahoma resulted in a dissertation studying the “evolution of reproductive behaviors in fishes.”

“I’ve got a multitude of research interest areas,” says Pyron. “Some are funded and some are not, based on the difficulty of locating funds. The nice thing, though, about being able to do a range of research is students have a variety of topics that they can choose from that I have some experience in. It’s not just one, narrow focus.”

Pyron’s research has been funded by the U.S. Department of Agriculture and the National Fish Habitat Partnership. He has received funding from Triad Mining Inc. to monitor the ecology of streams that were to be destroyed for strip coal mines and reconstructed following mining.

Pyron’s research is designed to monitor the streams following reconstruction. He has also received grants for research on the Wabash River. Pyron’s research agenda is aimed at restoring the natural connectivity of oxbow lakes throughout the Ohio River basin. With support from the U.S. Fish and Wildlife Service and The Nature Conservancy , the Ohio River Basin Fish Habitat Partnership is surveying fishes in oxbow lakes and off-channel habitats. The goal is to identify the value of these habitats to sport fish and nongame fish. A long-term goal is to reconnect off-channel habitats by modifying or removing levees to allow natural annual flood events to reach them from adjacent rivers, repopulating them with fishes. 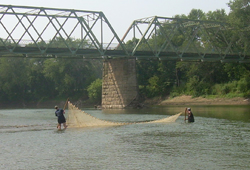 Samples are collected in a seine on the Wabash River.

In his fish-community work on the Wabash River, Pyron has been able to see some of the long-term changes to the fish and the river life. “We go to the same sites every year, collecting fish in the same way, monitor and release them. We have been monitoring 28 sites on the Wabash for 10 years.”

Pyron’s research has been compiled with that of his predecessor, DePauw University professor emeritus James Gammon, who made the same fish collections on the Wabash River from 1974 to 1998. The combined data and his collaborative work with Brent Murry of Central Michigan University show significant changes in the Wabash’s fish populations.

“What ended up happening was the fishes that are insectivores have increased in abundance over the last 20 years and species that were eating plankton in the water column have decreased. When fishes are lumped into trophic groups, based on what they eat, there are huge changes in the fish assemblage,” said Pyron. Pyron and Murry intend to use these results as the basis of forthcoming proposals to the National Science Foundation.

The overarching purpose of Pyron’s research projects is to monitor these changes and attempt to understand the effect, whether good or bad, that people are having on the ecosystem. In addition, research is directed at individual fish species, and Pyron has been looking at the shape of fishes within watersheds and how much variation in shape, or morphology, is a result of local habitat variation and human modifications of the flow regimes.

“Currently, we’re also looking at evolution of reproduction in fishes, specifically traits related to sperm variation and competition in several different groups of fishes.” By looking at the evolution of reproductive strategies within families of fishes, Pyron and his research partners are “trying to identify if there are predictable reproductive strategies based on sperm competition. And, yes, there are — but this isn’t surprising.”

The diversity of Pyron’s research interests has led him to some uncharted waters, so to speak, in his work with fish morphology. “Our morphology work is distinctive because it’s a relatively new area of research, so we don’t know what to expect. There are changes in shape, which varies between males and females, which is probably related to their reproductive strategies. We at Ball State are the only people I know of looking at long-term changes in morphology of fishes.”