During the summer of 2012, students from Indonesia, Malaysia, and the Philippines visited Ball State as participants in the Study of the United States Institutes (SUSI) program. With a focus on new media in journalism, this is the second year that Mary Spillman, assistant professor in journalism, and Suzy Smith, assistant professor in telecommunications, have received a grant from the U.S. Department of State program.

“We wanted the students to have a great experience and to learn about new media and the United States,” says Spillman, who is in her 14th year of teaching at Ball State, following a professional journalism career at The Associated Press and WRTV Indianapolis. “However, I feel that I learned as much from them as they learned from us.”

Hosted by academic institutions across the United States, the Student Leader Institutes include an intensive academic component, an educational tour of other regions of the country, local community service activities, and a unique opportunity for participants to get to know their American peers. Twenty visiting students participated in Ball State’s program from June 24 through July 21, 2012.

Spillman and Smith created the curriculum for the four-week study program, which included course work in journalism, telecommunications, U.S. history and government, American culture, and leadership. Students also participated in cultural presentations, providing information on their home countries and cultures for other students. This allowed for a cross-cultural exchange among the students as well as the Ball State personnel.

The on-campus experience was supplemented by trips to Indianapolis where students visited the Indiana Statehouse, WISH-TV, 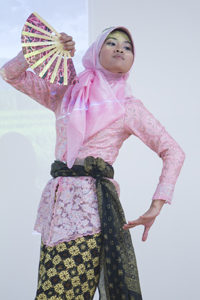 Casandra Aleksia, Indonesia, performs as part of the cultural exchange during the July 2012 on campus sessions.

“It’s amazing how Americans come together and unite,” said Malaysian student Nirosha Xavier when interviewed July 4 waiting for the fireworks on the lawn of Minnetrista near the White River.

While at Ball State, the students participated each week in community service activities at Habitat for Humanity and Second Harvest Food Bank.

The students completed their U.S. visit with an eight-day educational study tour, led by Spillman and Smith, with visits to Gettysburg, New York City, and Washington DC. They particularly enjoyed Times Square, the U.S. Capitol, and a tour of Voice of America.

“It’s so interesting to see it through their eyes,” says Smith, who joined the telecommunications faculty in 2008 after 25 years in the broadcast industry as a senior producer at CNN.com, CNN Sports, and The Weather Channel. “The things that they look at and think about, we so take for granted.” 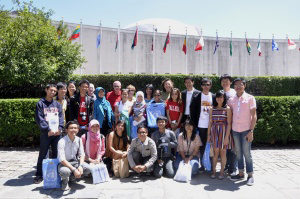 Students outside the United Nations in New York City.

When the trip concluded in Washington DC on July 29, Spillman and Smith faced the biggest challenge of the program. “After spending five weeks together, it was very difficult for them—and us—to say goodbye,” Spillman says.

The group continues to stay in touch with faculty and each other through Facebook, Skype, and Google+. “We hope that someday we might be able to arrange for a reunion of all participants,” Smith says.

Both Smith and Spillman say it has been gratifying to hear from past SUSI students who continue to make an impact. Angelita Bombarda, one of the 2011 SUSI participants, recently was selected as one of the Ten Outstanding Students of the Philippines. Bombarda wrote that she would not have received the honor were it not for her “life-changing SUSI experience.”

Other SUSI students continue to travel the world, participating in prestigious programs in Singapore and the United Kingdom. “I am confident these student leaders will make important contributions to their individual countries in the years to come,” Spillman says.