Sports can have a profound impact on a community, a country, and the world. It can also serve as an effective path of diplomacy, helping to transcend cultural differences and bringing people together, which is the mission of Sports United, a cultural exchange program of the U.S. Department of State. With the support of a grant from Sports United, Lindsey Blom, assistant professor of sport and exercise psychology with the School of Kinesiology, is using soccer as a diplomatic tool.

Her choice of soccer is driven as much by her personal interest and passion as it is by her profession. Blom played on the women’s soccer team at Georgia Southern University and was a member of the Jacksonville Jade, a women’s semiprofessional W-League team, for two seasons. 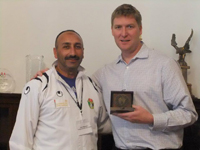 A Jordanian coach presents a gift to Scott Flood, manager of coaching programs at U.S. Soccer.

Blom has implemented a three-phase project aimed at developing a dialogue between coaches in Jordan and the United States. This project was made possible through collaboration with School of Kinesiology colleagues Larry Judge, associate professor of physical education, and David Pierce, assistant professor of sport administration. Additional partners include Lawrence Gerstein, director of the Center for Peace and Conflict Studies, and Kenneth Holland, director of the Center for International Development, along with the Indiana Soccer Association.

Phase I of the project was completed in January 2012, when three Ball State faculty members and three community experts traveled to Jordan to conduct a series of two-day workshops in the cities of Amman, Zarqa, and Ajloun. At each session, 25 youth soccer coaches and peace experts discussed how to use the sport to develop citizenship, manage conflict, and build leadership.

“Along with determining what skills we wanted to teach and how we would do this, we explored and decided how to connect aspects of the overall curriculum to coaching and playing soccer so that it was relevant and meaningful to the participants,” says Gerstein. Athletes were brought in at the conclusion of the workshops and the coaches were able to run them through the new activities they had been discussing. 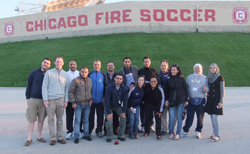 Coaches attend a Chicago Fire game while participating in the May 2012 workshop.

Gerstein, who had very limited knowledge of soccer before the project, was amazed at the impact of this sport within the community. “Soccer is an excellent activity to easily bring different groups of people together, and it can be effectively used to teach a range of living skills such as respect, integrity, honesty, responsibility, wellness, and conflict resolution,” he says. In May 2012, 12 of the Jordanian coaches who participated in the January workshops traveled to the U.S. for the second phase of the project, visiting Chicago, Indianapolis, and the Ball State campus.

“The idea was to expose them to the U.S.,” says Blom, “and what soccer is like here and the various aspects of development and different types of programs that we have. We had them work with other soccer coaches, to help them start a dialogue with American counterparts.”

The purpose of this project was not to simply learn new ways to play soccer but also to foster cultural integration.

“Many of the Indiana coaches have not been exposed to Arabic cultures, so that’s another piece of it,” says Blom. “We also wanted to really integrate how to use soccer to build peace—whether that’s peace among teammates, with a rival community, or peace from a national standpoint, which can start small and become big. The individuals involved in the project, from both Jordan and the U.S., expressed continual gratitude for the opportunities to interact and learn from each other as well as new cultures.” 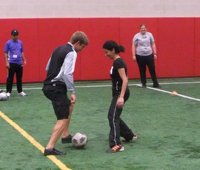 Coaches have a chance to practice their skills during the workshop.

Blom and other Ball State faculty will return to Jordan in spring 2013 and are intent on finding resources to sustain the project past the current Sports United grant.

Blom has been involved with a number of projects that seek to use sport as a tool for individual and community growth. She has benefited from several sponsored programs, including support from the Indiana Association for Health, Physical Education, Recreation and Dance and various community foundations across Indiana.