What constitutes having a purpose in life? What difference does it make?

Those are questions that Kendall Cotton Bronk, assistant professor of educational psychology, has attempted to address. Bronk believes that purpose represents “an intention to accomplish something in life that is at once meaningful to the individual and at the same time leads to productive engagement with the broader world.” Understanding the effects of having a purpose in one’s life as a young person has served as the foundation of Bronk’s research agenda. 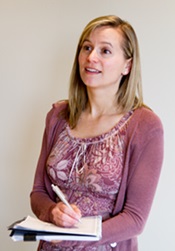 After graduating from Northwestern University, where she majored in communication studies with an emphasis on interpersonal relations, Bronk went on to receive her doctorate from Stanford University in psychological studies. There, she became captivated with the study of child and adolescent development, particularly moral development. Through her work as a doctoral, then postdoctoral student with William Damon, she began to delve into the question, “What difference does your life make?” This led her to question purpose and the role it plays in one’s life, specifically in the lives of youth.

Results revealed that young people with a purpose in their lives tended to be more hopeful about their future, more satisfied with their lives, and poised to thrive in a wide variety of other ways. Upon taking a position at Ball State, Bronk decided to focus her research on understanding the role of purpose among rural youth.

Supported by a $40,000 grant from the Spencer Foundation, Bronk and her colleagues from the educational psychology department interviewed students from Ball State and a rural Indiana high school. The students completed a survey and participated in a face-to-face interview that examined the role of purpose in their lives. Follow-up interviews were conducted with those students who exhibited a strong purpose in their lives. They were asked to identify the role their community played in the development of that purpose.

“Many adolescents and emerging adults develop a purpose in life in conjunction with developing a stronger sense of identity,” says Bronk. “Sometimes their purpose represents a career interest, but it does not have to. It may also represent a community service interest, a religious conviction, or a familial commitment. However, purpose is usually such a significant part of who young people are that it impacts many aspects of their lives.” 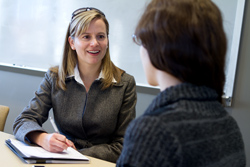 Although some research indicates that rural youth face greater challenges, such as fewer job prospects, according to Bronk, other studies suggest that rural youth have distinct advantages. Their families are more likely to be involved in their lives, mentors are more readily available, and there are fewer distractions, compared to inner-city or suburban youth.

In the past, researchers have tended to focus on the problems and shortcomings that young people confront, such as depression, bullying, etc. However, the practice of psychology has more recently focused on the positive.

“We have begun to realize that just taking people from a negative position to a slightly less negative position isn’t all we should do,” Bronk says. “There has been a push in psychology to focus on people’s strengths, talents, and capacities and developing these facets of people’s lives. Developing a sense of purpose plays a key role in helping all people thrive.”

In the future, Bronk plans to explore the role that purpose plays in the development of entrepreneurs. Research indicates that many youth with particularly strong commitments to various purposes in life become entrepreneurs. These young people develop a commitment to a social need and in order to fulfill such a need, they launch their own businesses.

Bronk is eager to study entrepreneurial purpose and the role it plays in young people’s development. She is currently working on two John Templeton Foundation grants to support research on the role of humility among entrepreneurs and looking at the role of purpose in entrepreneurship.