Beth Turcotte’s vita includes everything from being an agent for actors to finding ways to ensure children can study the arts even as funding is cut in schools.

“The arts give students tools that can be applied in whatever they decide to do,” says Turcotte, Ball State’s Outstanding Creative Endeavor Awardee for 2012. “They are equipped to handle life holistically rather than marginally. In that, I think the arts expand awareness, mindfulness, sensitivity, and remind us of who we are and why we’re human.”

After receiving her master of fine arts from Southern Methodist University, Turcotte began her career as a professional actress for Theater Three in Dallas, Texas. She played many roles on the stage, including Medea in Medea, Velma in Chicago, Adelaide in Guys and Dolls, and Jenny in Three Penny Opera.

In 1979, Turcotte moved to Los Angeles only months before the largest Screen Actors Guild’s writers strike in history. Unable to find a job as an actress, she realized she would need a broader array of skills to be more marketable in her field. So she became an agent, helping companies find actors and actresses for their commercials. This allowed Turcotte to learn the business side of her profession.

After two years as an agent traveling between Los Angeles and New York City, she came to Ball State University in 1982 to teach in the School of Music. She served as an assistant for the Pride of Mid-America, Ball State’s marching band, and the University Singers until 1986, when she joined the Department of Theatre and Dance. 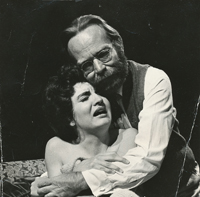 “When I came to Ball State, my professional work as an agent really helped add to what I could bring to the students,” said Turcotte. This professional experience was also beneficial as she helped establish curriculum for the department’s musical theatre and acting options available to theatre majors.

In 2000, Turcotte was nominated for Researcher of the Year. Her research agenda grew out of a frustration that the arts were being cut in schools. As school budgets tightened, instrumental rental fees and other costs were passed onto the students’ families. Those students whose families could afford the added expense could still access these opportunities, but if not, those children were left with little to no opportunity to study the arts. 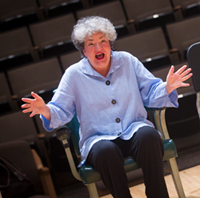 After extensively investigating how schools and communities determine funding for arts programs, Turcotte felt she needed to play a different role in this process. She partnered with the Ball Brothers Foundation, Ball State’s Teachers College, and other Muncie-based nonprofit organizations to improve access to the arts for local students.

Several programs emerged from these collaborations. Instruments in the Attic, a partnership with the Muncie Music Center, refurbished and distributed donated instruments to children in the community. 401(k)ids helped offset the cost for a child to study dance, music, theatre, or the visual arts.

“So we got all of these kids with all of their equipment, dance shoes, art supplies, etc., and sent them off,” she says. “We made everything possible; $5 million and 12,000 children later, we had all kinds of programs in dance, theatre, and music.”

If creating a plethora of arts opportunities for local youth wasn’t enough, Turcotte led the immersive learning experience that created the highly acclaimed musical, The Circus in Winter. Fourteen Ball State students adapted the novel by Hoosier author and Ball State faculty member Cathy Day, into an original musical that has won a series of national accolades. The project, sponsored by the university’s Virginia B. Ball Center for Creative Inquiry, gave the students complete control of the production, from creating the script, to crafting the lyrics and writing the music. 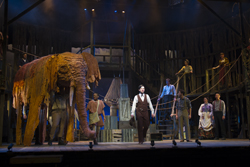 After a wildly successful on-campus debut, the musical was presented at the January 2012 regional festival of the Kennedy Center American College Theater Festival. The success continued as the students were selected to participate in the national festival, earning an expense-paid trip to Washington, D.C., and the opportunity to perform at the Kennedy Center. The Circus in Winter earned eight awards at the national festival, including Outstanding New Work, Outstanding Set Design, and Outstanding Director of a New Work.

The national attention has not stopped, as the play was selected for the National Alliance in Musical Theater Festival in New York City in October 2012. After two weeks of rehearsal, a shortened, 45-minute reading was performed for an audience of theatre industry professionals. Leading the cast was Broadway star and Tony Award winning actress Sutton Foster. Foster has a long relationship with Ball State, having served as a master teacher, mentor, and guest speaker for many years and was awarded an honorary doctor of arts degree in May 2012.

Turcotte has played many roles on stage and helped develop highly successful programs and curriculum. But she describes her greatest joy as, “Being a mom. This is what I do; being a mother is who I am.” In being a mother, much like being a teacher, “you put everything you can into them, but eventually, just like with Circus, I have to stand back and watch it enter into an arena I’m not qualified to carry it through. I’ve done what I can, now it will just have to grow on its own.”