What if oral histories, handwritten journals, 19th century library records, and more were available at your fingertips?

As assistant dean for digital initiatives and special collections, John Straw is working to make that possible. He oversees the digitization of materials from Ball State University Libraries’ collections and other sources. 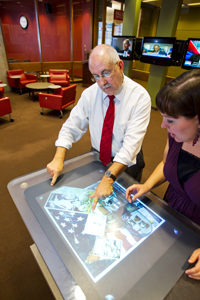 “Since there are millions and millions of pieces of paper in the archives and more arriving every day,” Straw says, “I don’t know if it will be possible that everything in the archives will be digitized during my lifetime, but that’s what we’re working toward.” He says that because of the voluminous and ever-expanding nature of information, a primary function of librarians and archivists is to analyze and make educated choices on priorities for the transfer of historical, educational, and cultural resources to digital format. 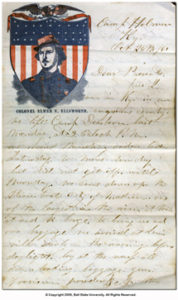 University Libraries has received six Library Services and Technology Act digitization grants, totaling more than $130,000, for projects ranging from U.S. Civil War materials to documents about women’s history to historical newspapers. The most recent grant partners the digital initiatives program with the Marion Public Library to create a digital collection of oral history interviews between Grant County military veterans and high school students. The interviews will be available online as recordings and written transcripts.

Straw and his collaborators partnered with the Center for Middletown Studies on a project called What Middletown Read, funded through the National Endowment for the Humanities, to digitize Muncie library records from the 1800s.

Students in the Institute for Digital Intermedia Arts (IDIA) called on the digital initiatives team for help creating a virtual tour of Middletown, including the Ball Brothers Glass Manufacturing Co. plant as it looked in the 1920s. IDIA’s applied research project was developed in partnership with the Center for Middletown Studies and the University Libraries and is funded by the Provost’s Immersive Learning Grant. 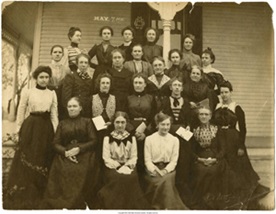 “We worked with records from Archives and Special Collections, the Drawings and Documents Archive, and Minnetrista to build what the factory looked like in 1920,” says Straw. “You can walk into it virtually, find the machinery, and see how the assembly line worked and how they were making Ball jars in 1920.”

“We’ve had researchers from Oxford, Germany, Canada, and Australia who have come or contacted us because of what they found when we digitized it and made it global. What we’re doing with audio and starting to do with video is a niche for us,” says Straw.