How do you get 20 elementary-age children out of bed and into a computer lab on a hot summer morning?
Promise to teach them writing skills, of course.

Barbara Miller and three student teachers did just that during the summer’s Composition Camp. Miller, an English teacher at Cowan High School, has been involved with Comp Camp for several of its 20 years. 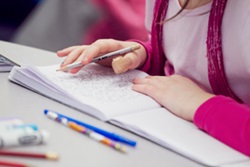 “We’ve all come together because we all love to write,” Miller says as she introduces herself and the first day’s agenda to the eager pupils.

It’s not just the young writers who benefit each summer from Comp Camp. The camp, like other programs associated with the Indiana Writing Project (IWP), helps teachers and student teachers as much as it does the pupils.

“I hope that pre-service teachers come away with a renewed sense of themselves as writers, as they often have forgotten the joy of creative writing while bogged down with so many academic assignments,” Miller says.

This symbiotic relationship is a trademark of the IWP, part of the National Writing Project’s (NWP) network of sites. Under the leadership of Linda Hanson, recently retired professor of English, IWP became the first of six current NWP sites in 1986. Ball State has served as the state’s headquarters for the IWP, with Hanson as IWP site director, since 1995.

Hanson says Comp Camp is a prime illustration of how IWP programs integrate all of the Writing Project’s goals by benefiting teachers as much as students.

“It’s a program focused on providing opportunities for youth; however, our real purpose, because we are a professional development network, is to provide opportunities for the teachers,” Hanson says. “So everybody benefits; the teachers carry these techniques back to their classrooms, and the kids get to become published writers.”

In 2008, the Indiana General Assembly passed a concurrent resolution commending the Indiana Network of Writing Projects for “promoting better writing that leads to a most desirable chain of events for Hoosier students—better learning and thinking, better reading, better academic success, and better performance in the 21st century workplace.”

Comp Camp is just one of many programs facilitated by the Indiana Writing Project. Each year, IWP offers its Summer Invitational Institute to which teachers from across the state are nominated. Participants write, research topics in writing instruction, and share successful, practical teaching techniques. 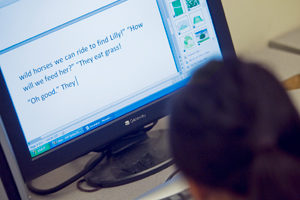 After the institute, participants can become teacher consultants who lead topical workshops and in-service training, sharing the benefits of the Writing Project with other Indiana teachers.

The Writing Project also emphasizes research on writing education. Ball State’s grant applications on behalf of the IWP (to the National Writing Project funded by the U.S. Department of Education) have garnered nearly $379,100 in federal funding and $110,000 in state funding from the Indiana Department of Education. These grants provide programs that support writing teachers and their research. In at least one case, the funds have ultimately resulted in improved state test scores at local schools.

“Right now we’re doing a massive study looking at how the ISTEP evaluation and the NWP rubric correlate,” says Hanson.

For example, holistic scoring methods recently determined that a local school needed to work on content, so the IWP researchers presented that analysis along with recommendations to the school, Hanson explains.

“Then the next year, we’re doing Writing to Learn strategies across the curriculum, and guess what? Their scores went way up!” she says. “We’re changing the environment at the school, creating a culture of writing.

“Knowing how you can use assessment to your advantage, that’s the cool part.” 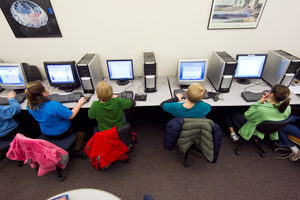 Hanson’s passion for the powerful potential embodied by the IWP permeates almost every aspect of her daily life. Even in retirement, she plans to put together an advisory board to help pursue additional funding opportunities for the Writing Project.

While professional development is a paramount goal of the program, her commitment to the Writing Project stems from a more personal passion.

“I have grandchildren,” says Hanson. “I want to make sure that their world is one in which they can participate actively, so that they actually can make decisions and think through what they need to think through for civil action. I dedicate a lot of time to the IWP because I care about what happens to, very specifically, my grandchildren’s world, but also the world that I’m living in. So I’ll do anything I can do to help the next generation think critically and communicate more clearly.”