Ball State’s 2011 Creative Endeavor Awardee, Sean Lovelace, began his professional career in nursing, and he was quite successful. 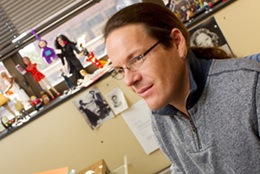 “It was definitely very fulfilling and rewarding,” says Lovelace, now an associate professor of English, “but even when I was practicing nursing, I would write.”

Lovelace’s venture into the world of writing has taken many forms, from creating his own magazines as a child to writing fanciful poems. His life came to a crossroads when he applied to both nurse practitioner and MFA programs, thinking that fate would intervene and the pathway of his life’s work would be defined for him. However, being accepted to both programs, Lovelace had to make a decision about the direction of his life, and he chose academia and writing.

“I’m glad I work for an organization that values creativity,” he says. “Ball State has been an awesome place in which to work for a lot of reasons, but its emphasis on original expression is definitely one of them. I would hate to think of a society that didn’t value the creativity of its members. It’s one of the things I love about Ball State.”

Lovelace is known for flash fiction, a style of writing shorter than a short story. In the last four years, Lovelace has published 72 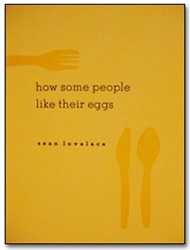 Cover of Lovelace’s book,
How Some People Like Their Eggs.

works of fiction, poetry, and creative nonfiction, as well as six essay-length book reviews. Lovelace has also published three books—Fog Gorgeous Stag, How Some People Like Their Eggs, and Grass—and contributed to five anthologies—They Could No Longer Contain Themselves: A Collection of Five Flash Chapbooks, Tarrt’s 4: Incisive Fiction from Emerging Writers, DIAGRAM III, Tarrt’s 2: Incisive Fiction from Emerging Writers, and Women Behaving Badly—all since 2004. How Some People Like Their Eggs won the Third Annual Rose Metal Press Short Short Chapbook Contest, and all 350 copies were sold. Lovelace is already being solicited by editors who want to feature his work in their collections.

His experience in the field has made him a great candidate for editing other flash fiction pieces for Southerner.net and Black Warrior Review, reviewing literature for NewPages.com, and acting as judge for the Robert Olen Butler Prize.

Lovelace’s career is arrayed by prestigious awards, including the JMWW Anthology Best of Internet in 2011, Tattoo Highway flash fiction contest winner in 2008, finalist in the New Millennium Writing Fiction Contest in 2006, Crazyhorse Fiction Award in 2005, and The Paper Journey Press Short Fiction Award in 2003, to name a few.

Even with all of his published work, Lovelace also keeps up a blog, which acts as a catalyst for his writing and professional networking.

“Creative writing is a creative act,” he says, “but it is not easy. Anything worth doing is difficult, but intellectually, for me, that makes it interesting.” 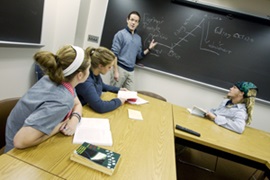 Lovelace with one of his writing classes.

Yet, for all of these accomplishments in the field of writing, Lovelace says that he is a professor who writes, not a writer who happens to teach. Lovelace joined the Ball State faculty in 2006. Since that time, he has become known for his “inventive exercises that help students produce their most creative work,” says Mark Neely, director of creative writing and 2009 Creative Endeavor Awardee.

Lovelace’s students have greatly benefited from his ability to expand the parameters of fiction writing. “He gets to know his students,” says Rachel Koch, senior English studies major. “He learns their strengths and weaknesses, not only as a writer, but as a person. Then he finds a way to help the student exploit his or her abilities and become an exceptional writer.”

With the solicitation of editors from across the nation for his work, praise of his colleagues, and admiration of his students, one must wonder what is next for Lovelace. However, if you ask him about his goals, he just shrugs.

“I try to live day-to-day. I actually think that if you’re trying to get the most out of the day—whether it’s running, teaching, writing, service to the university—if you just try to do the best you can that day, a year will pass, and I think you will have made progress.”