Susan Lankford and her students are making history by preserving the past. As director of the Center for Historic Preservation (CHP), Lankford leads a team of preservationists from Ball State who join forces with other disciplines across campus to help revitalize historic features in communities in and around Muncie—and beyond.

A spring 2010 project sent a team of CHP students to Galena, Illinois, where they conducted a complete historic survey funded by the town. Working 14-hour days, the team of a dozen students from the areas of historic preservation, architecture, urban planning, and landscape architecture surveyed about 2,300 buildings in a single week.

Projects like this help prepare CHP students for careers in the field and give them the edge that only immersive learning and fieldwork can provide. Thanks to their efforts, the town of Galena is now working toward designating a National Historic Landmark historic district.

Headquartered in the historic Mary Lincoln Cottage at Minnetrista, CHP is an outreach of the graduate program in historic preservation and the Department of Architecture. Founded seven years ago, the center is one of very few organizations of its kind in the country. Its goals are twofold: to provide heritage preservation services to the public and to give students an intense education with opportunities for professional development.

CHP has completed dozens of historic preservation and revitalization assignments for the State of Indiana, local towns and communities, and individual clients. Support for projects comes from a variety of sponsors, including Minnetrista, Wabash Marketplace, and the Community Foundations of Central Indiana and Muncie/Delaware County.

Duncan Campbell, associate professor of architecture and historic preservation graduate program director, helped get a team involved in preserving the Union Literary Institute (ULI), a pre-Civil War manual labor school, which had spent a century crumbling into a neglected edifice on a farm in Randolph County. Campbell and Lankford worked with the CHP students as they wrote a thorough preservation plan and turned their results over to the community along with instructions on how to raise funds to protect or rebuild the school. Randolph County Commissioners and the ULI Preservation Society funded the project through a grant from the Indiana Office of Community and Rural Affairs.

“That was a particularly satisfying project,” says Campbell, referring not only to the historic significance of the building, but also its social, political, and archeological import. “It was a great site for cross-collaboration and scholarly research beyond CHP.

“Preservationists do one page of it; archaeologists do another. We’re all similarly involved and have the same ethical and value-based motivations. Those kinds of projects for students are golden.”

Walk by the Ball State office in downtown Indianapolis on a Tuesday or Thursday summer night, and through the ground floor windows, you’ll see a dozen students plotting away at drafting tables. These are College of Architecture and Planning: Indianapolis Center (CAP:IC) students in the master of urban design (MUD) program, overseen by the center’s director, Brad Beaubien.

This year, the Indianapolis Center celebrates its 10th anniversary as an urban laboratory that provides immersive learning opportunities to students and serves as a community resource by linking community needs with student projects.

“We’re trying to elevate the professions that we teach,” says Beaubien, who manages the center’s community outreach projects. 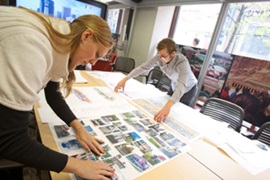 “Ideally our projects find that sweet spot where they engage students, promote good design, and address a community need.”

One such project is the Mid-North Quality of Life Plan, which will benefit neighborhoods radiating from the intersection of 30th and Meridian streets in Indianapolis. CAP:IC is assisting with data collection, graphic design, guiding the process, and infusing best practices throughout the project. This project is funded through the Local Initiative Support Corporation, a national partner whose Indianapolis office is supportive of CAP:IC projects.

The first class of MUD students graduated in 2010 with impressive field experience to their credit. Their East Washington Street Vision Plan, which started out as an academic project, became an actual initiative. The city ultimately hired the students to work on an Indianapolis outreach project that may one day make the students’ vision a reality.

That first class of 10 MUD students came up with 10 project ideas to revamp East Washington Street. Proposed projects include public open spaces such as plazas and rooftop gardens, integration of historic structures, and sustainability measures such as stormwater management.

Beaubien says the concept may take 40 years to realize and is dependent on outside factors such as the passage of a public transit referendum.

An earlier partnership with the city, funded by the American Institute of Architects, produced a revitalization concept that evolved into a prestigious ongoing project — the Smart Growth Renewal District—that explored how communities in Indianapolis can be revitalized in an ecologically, socially, and economically sustainable manner, using the area around 22nd Street and the Monon Trail as a model.

RIMMEA: FINDING FIRM FOUNDATIONS FOR THE BASE OF THE PYRAMID

While CHP works to protect and commemorate the past and CAP:IC strives to design a more beautiful present, Mahesh Daas is visualizing a better future. 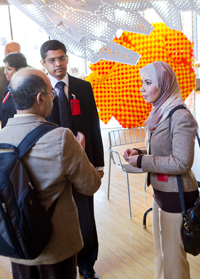 Mahesh Daas, center, with participants
at the March 2011 workshop.

Daas, chairperson for the Department of Architecture and Irving distinguished professor of architecture, co-organized a landmark National Science Foundation workshop on “Research in Materials and Manufacturing for Extreme Affordability.” The two-day event was webcast live to audiences worldwide and brought to Ball State’s campus a diverse group of more than 30 engineers, architects, management scholars, and entrepreneurs interested in aligning entrepreneurship with design, emerging technologies, and social justice.

Attendees discussed imaginative solutions to problems faced by the impoverished or disaster-stricken populations at the “base of the pyramid.” Those are the 4 billion people worldwide who live on $4 or less each day.

“Applying creative solutions to dire situations can be very profitable and sustainable for businesses. It’s not just about charity,” Daas says. “It is about bringing capitalism and entrepreneurship to places where there is much to be done and also much to be gained.

“Extreme affordability is not cheap. Extreme affordability is smart. We’re talking not just about scientific discovery and technological innovation alone, in a vacuum; we are looking at modeling businesses and encouraging social entrepreneurship in a way that makes things extremely affordable. We are talking about a paradigm shift in thinking about research, design, and innovation.”

In hosting the interdisciplinary workshop, CAP and the Institute for Digital Fabrication partnered with the American Society of Mechanical Engineers, Engineering for Change, and the Institute of Electrical and Electronics Engineers. The conference was unique not only in its focus on serving oft-overlooked populations, but also in its use of emerging media and its participant-led format.

The workshop fostered dynamic and engaging group discussions, and each participant had numerous opportunities to present ideas to the group. Attendees were encouraged to tweet the event, and this live commentary was visible in the conference room via a Twitter cloud made possible by the Institute for Digital Intermedia Arts.

Daas, who will chair an upcoming session on extreme affordability at a national Schools of Architecture Association conference, said Ball State’s emerging media resources combined with the attendance of eager innovators from all over were instrumental in making the landmark event a success.

“My hope is that in the next five years we will see a concrete definition of this approach across disciplines, across continents, and across paradigms,” Daas said.