Melody Bernot’s projects are numerous, enterprising, and diverse. An early-career faculty member in the Department of Biology, she is collaborating with students on eight funded projects, including research on the habitat of an endangered pupfish population in the hot, shallow salt creek of Devils Hole in Death Valley, Nevada. That study is funded by the National Science Foundation and the National Park Service’s Death Valley National Park. 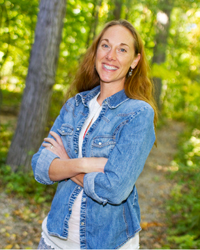 Closer to home, Bernot has assumed supervision of an ongoing project formerly directed by Professor Emeritus Robert Pinger of the Department of Nutrition and Health Science. In the interest of Hoosier health, the Indiana State Department of Health needs an accurate reading of the potential for the appearance of cases of West Nile virus, a potentially serious disease spread by mosquitos. The health department supports student surveillance efforts in collaboration with Bernot.

In addition, Bernot helped procure a student grant from the Indiana Academy of Science to study herbicides in state streams. She is also part of a growing collaboration with a colleague from her own department, Professor Tom Lauer, Ball State’s 2010 Researcher of the Year. Lauer’s work is close to Bernot’s scholarly heart: the testing of pharmaceutical concentrations in freshwater habitats which, for this project, is near-shore Lake Michigan. All of Bernot’s investigations fall into two main research categories: trace organics in freshwater systems and novel instrumentation to understand where those trace organics are going. Microelectrodes are the most common instruments she uses.

“They look like really tiny syringes,” she said. “We customize them for field use and ship them out for free to other researchers. We’ve adapted and integrated an existing technology and made the instrumentation user friendly and field friendly.”

Bernot received a grant from the National Science Foundation for the development of microelectrode instrumentation for novel assessments of microbial biofilms in ecological applications. She and her students use the customized instruments frequently. During the 2011 summer semester, she directed the work of two students—one in New York and one in Nevada—who were using her microelectrode instrumentation in their research.

“I think once people start to realize how important the small scale is to what’s happening with freshwater contaminants, they recognize the utility of taking minute measurements,” Bernot said. “All the cool stuff happens at a really small scale.” 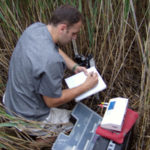 The microelectrode instrumentation is useful in a variety of fields, which supports Bernot’s

“The students are doing phenomenal work,” Bernot said. “Both undergrads and graduates have been published in strong journals. That’s definitely on par with a top-tier research institution.”