Distinguished investigator. Respected colleague. Prestigious grant recipient. These are some of the descriptions that might come to mind when considering qualifications of Ball State University’s Researcher of the Year. The 2011 award winner, Todd Trappe, possesses them all. 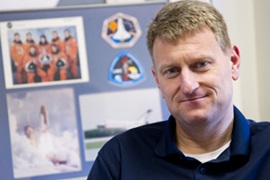 Trappe began his journey with Ball State in 1993 as a PhD student. He says that the reputation of the Human Performance Lab drew him here. Trappe then pursued a postdoctoral fellowship at Penn State University under the tutelage of Bill Evans, the first doctoral student graduating from Ball State’s Human Performance Lab and an internationally recognized expert in aging. (Evans and Trappe are a part of the long line of distinguished researchers who have graced the lab since its inception in 1965.)

Trappe has since visited every major physiology lab in the world (except Australia), but he says the “mix here at Ball State University was the best fit for me.” Indeed, he returned to the Human Performance Lab to carry out his career as a faculty member in 2004. He notes that the Human Performance Lab really allows for the Ball State immersive learning philosophy to take form, and that has been the case since the lab’s creation. The students work in the lab, not just as individuals sitting off to the side but as participants involved in the projects and working alongside the professors as peers and researchers.

In his time as a researcher and professor, Trappe has produced 76 peer-reviewed research publications and secured more than $12 million in grant funds. Trappe says that the amount of funding—which has come from numerous domestic and international sponsors, including the National Aeronautics and Space Administration (NASA) and National Institutes of Health (NIH) —speak to the distinctiveness of his research.

Todd Trappe’s recent endeavors include a $600,000 NASA project he is leading with Scott Trappe, HPL director and John and Janice Fisher professor of exercise science. Their team is investigating skeletal muscle health on American, Russian, and other crew members before and after six-month stays on the International Space Station. They are also collaborating on a parallel study of how exercise affects muscles of volunteers subjected to long periods of bed rest.

“Funders are judging you on, ‘Is this a good investment? Is there likelihood that we will get a return on this investment?’” Todd Trappe says. “You get the grant, you do the work, you publish it, and if you do ground-breaking research of the highest caliber, it will reap rewards for you and the sponsor—and it has so far.” 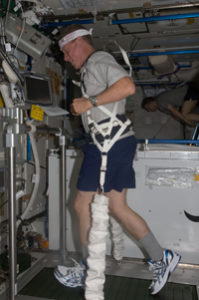 Trappe enjoys the admiration of his colleagues and students at Ball State, as well. “What makes Dr. Trappe such a great role model for his students is that he teaches by example the importance of integrity, attention to detail, work ethic, and problem solving,” says former doctoral student Jared Dickinson, who is pursuing a postdoctoral fellowship at the University of Texas. “In my opinion, these fundamental qualities are what continue to make Dr. Trappe a successful researcher and mentor, but also these qualities contribute greatly to his students’ success beyond their tenure at Ball State University.” Those successes are far-reaching and exceedingly impressive.

“Dr. Trappe made sure that I received the most well rounded experiences possible to get thoroughly grounded in exercise research,” says former student Bridget Lester. “He definitely puts his students first, allowing each student to achieve his or her personal goals.”