Jennifer Blackmer, assistant professor of theatre, might have been a physicist or an astronomer by now. In some ways, perhaps she is. When her post-high school choice between a major in drama or physics turned out in favor of a collegiate theatre program, Blackmer was launched toward a career in the arts that would come to encompass her indelible love of science.

“I loved science, but I mistakenly thought that in choosing theatre I had to put all of that aside, and I did for the next several years during undergrad,” she says. She realized in graduate school that she could successfully combine her interests.

“My mission is to remind students that science is accessible,” she says. “A lot of students feel as though they aren’t allowed to think about or do science because they aren’t scientists themselves. That’s an idea I get out of their heads right away, because the scientists that I think have the most impact are those who realize that scientific inquiry is about everybody and for everybody in the world that science serves.”

Blackmer’s talent for communicating complex ideas to wide audiences makes a lasting impression on her students. Former student Kate Lumpkin, ’08, remembers working on Daughters of Trinity, a play about the creation of the atom bomb. The play, performed on campus in spring 2010, was the result of an immersive learning class, The Women of the Manhattan Project. Blackmer creatively demonstrated complex scientific ideas, Lumpkin says.

“There is one section where the stage directions painted such a vivid image,” she says. “The two scientists begin dancing with one another in a metaphorical representation of what it feels like to work intimately with someone and to be synced up so seamlessly with them, that you no longer know whose ideas are whose. 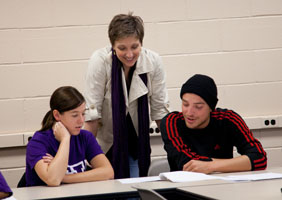 “That one scene shines a fascinating light on a question so many people have of ‘How do such horrible weapons of destruction get created?’ Jen showed it as a dance! I remember that that was such a powerful image to me at the time, and today, when describing her as a playwright to others, I always start with describing the genius of that scene.”

Lumpkin says Blackmer is skilled at whittling complicated ideas down to core truth so that everyone can relate and find an emotional connection.

“She breaks down the walls of science and then gives the audience the tools to rebuild them, while being thoroughly entertained and enveloped in a human story,” says Lumpkin.

In addition to receiving the Creative Endeavor Award in August 2010, Blackmer also received an Excellence in Teaching Award, the latter allowing her to design and teach a “dream class”—for Blackmer, a course called Science on Stage.

In October 2010, Blackmer was the keynote speaker at a seminar, Creating a Culture of Research on Campus, to an audience of scientists and teachers on the campus of the College of William and Mary in Williamsburg, Virginia, but it was not the first time she has presented to scientists. In March 2007, her students performed for an audience of 400 scientists in Washington DC as part of the national conference for the Council on Undergraduate Research. The play, The Human Faustus Project, was about genetic engineering and was an original and “radical reimagining” of Christopher Marlowe’s classic play, The Tragical Historie of Doctor Faustus. The crowd was wildly enthusiastic.

“They treated the students like rock stars,” says Blackmer. “They waited for autographs afterward.” 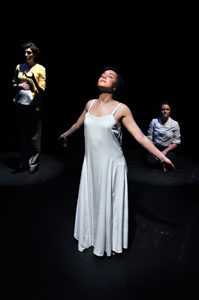 Michael O’Hara, associate dean for the College of Fine Arts, says, “Noted politicians, scientists, and professors from across the country have seen this play, and many commented on the power of the script and its ability to synthesize and humanize the difficult questions the unraveling of the human genome prompts.”

Blackmer coauthored the original play with the 15 students who participated in a 2006 seminar at the Virginia B. Ball Center for Creative Inquiry. O’Hara says the play “resists clichéd attacks against science or simplistic moralizations on human behavior and motivation. It intelligently and compassionately investigates one of the great questions with which humanity must grapple.”

Blackmer’s most recent work, Human Terrain, is about a controversial military program that sends anthropologists to Iraq. The play tells a story about an American anthropologist in Iraq who must balance her responsibilities to the U.S. military with her newfound friendship with an Iraqi woman.

The play’s theme is very much in line with Blackmer’s exploration of interdisciplinary studies and the interest in science and philosophy demonstrated in most of her work.

O’Hara says Blackmer’s “outstanding creative work is matched by her excellent record of teaching and service here at Ball State University. Her student and peer evaluations document an extraordinarily effective teacher who possesses considerable creativity, energy, and dedication. She is, quite simply, the ‘total package,’ an active, effective, and highly valued member of the Department of Theatre and Dance.”