Thomas Lauer, professor of biology, seems to embrace the “fish guy” label bestowed on him by friends and colleagues.

After all, the Researcher of the Year is the director of the Aquatic Biology and Fisheries Center within the Department of Biology and for about 30 years has done valuable research on the yellow perch population and habitat in southern Lake Michigan.

Since the 1970s, Ball State has provided much of the technical data used by the Indiana Department of Natural Resources (IDNR) in its management of yellow perch and other fish in Lake Michigan. Lauer’s research, which involves monitoring the yellow perch population fluctuation and changes in Lake Michigan water quality, has been crucial in this endeavor.

The yellow perch population saw a particularly steep decrease in the late 1980s and continued low density in the 1990s, which led to restrictions on both commercial harvesting and sport fishing that remain in place today.

“There’s a lot of interest in fish for their recreational and commercial value,” says Lauer. “As natural resource stewards, our understanding the economic and ecological value of fisheries is paramount because we want to be able to enjoy our natural resources. We want to use them but not abuse them. That’s the issue that’s most important to me.”

Lauer believes it is important for researchers and scientists to use the resources they aim to protect. “Being a natural resource user is a key issue for me,” he says. “It’s hard for me to think about managing a resource without that perspective of using it.”

For Lauer, that includes recreational fishing and enjoying seafood. 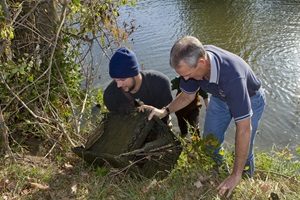 “My wife always gives me grief when we go out to dinner because I’ll often order salmon, and I’ll always ask the waitress or waiter what kind of salmon it is—especially if it says ‘fresh’—and I know when the seasons are around the world. If it says ‘fresh Atlantic salmon’ in January, I know they’re wrong. I just chuckle, my wife gets embarrassed, and I order the fish anyway.” He said his favorite fish is the yellow perch he cooks in his own kitchen, though.

Mark Pyron, associate professor of biology, says Lauer has “passionate inner motivation for everything in his life. He puts everything into his activities of teaching, research, cycling, and sailing. Others may try to emulate his approach, but most people cannot sustain his level of energy and involvement.”

Melody Bernot, assistant professor of biology, says Lauer is always eager to assist or collaborate. “He always has an open door to discuss ideas,” she says. “His research is of the highest caliber and well respected in the scientific community.”

She notes that Lauer strives to provide experiential and relevant activities for students, adding that his enthusiasm and concern for students are unmatched.

Bernot says she knows Lauer’s undergraduate students appreciate the unique environment Lauer provides in his classes and recognize that what they learn from him translates directly to skills needed in the workforce. Lauer has also mentored numerous graduate students who have all produced rigorous scientific research in fisheries, making them top candidates for positions in the field. 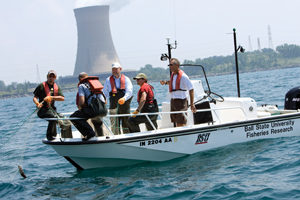 Although Lauer doesn’t directly teach about his research, he does use examples from his experiences. “I have a lot of underwater pictures from the Great Barrier Reef, and I use those pictures to this day in my general biology course,” he said. “I can say, ‘By the way, here’s a picture I took of this organism.’ I truly enjoy bringing my research into the classroom.”