Timothy Carter, assistant professor of biology, is devoting his professional career to studying Indiana bats’ activity patterns, preferred habitats, and roosting habits. The endangered Indiana bat has experienced a steady decline in population for no known reason, and Carter is on a mission to determine the causes behind this decline. 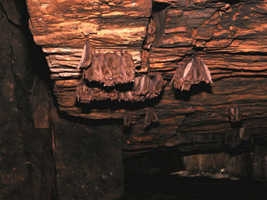 Named for the state where they were discovered, Indiana bats actually make their habitat from Iowa and Vermont in the north to Arkansas, Tennessee, and North Carolina in the south. Carter has been researching Indiana bats for more than 10 years, primarily in Illinois.

Funding for Carter’s research has come primarily from two federal sources. The Army Corps of Engineers has supported Carter’s research to help determine whether military testing disrupts the lives of the Indiana bats inhabiting trees on its property. Carter discovered that the military training activities do not seem to disturb the bats. The bats naturally stay away from humans—and the areas where the training takes place, which is good news for the Army and the bats.

The second funding source for Carter’s research is the United States Forest Service, which has funded Carter’s research every year for the past 10 years. Carter currently has two graduate students assisting him with his investigations. The funds are used in part for the small transmitters to track the bats. 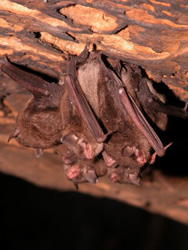 In doing his research, Carter and his graduate assistants use large, finely woven nets held up between two tall poles, stretching about 20-40 feet across and about 10 feet high. Using a pulley system, much like a flagpole, they raise the net to 20-30 feet and place it across a frequently used bat flight corridor. After catching a bat in the net, they will retrieve it and record important data such as gender, age, length, width, and weight. They will also place a small tracking device on the bat that will allow them to track its movements for about two weeks before the transmitter falls off. This helps Carter determine what areas the bats frequently visit and where they typically roost.

Over time, Carter will be able to draw conclusions—based on recorded evidence—that will provide important data for environmental decision makers.