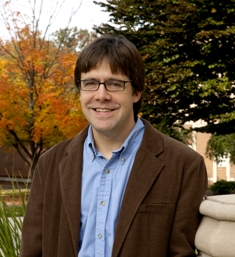 Since joining Ball State in 2004, Associate Professor of English Mark Neely has inspired and encouraged countless students, while continuing to produce an outstanding catalog of published work.

His poems have been widely published in literary journals and anthologies, and he has published several papers on writing pedagogy. Most recently, his poems “Lorenzo After Driving Drunk,” “Prologue,” and “Another Saturday” were published on FailBetter.com and Juked.com, online literary magazines.

Due to his impressive productivity, Neely is heavily involved in the advising and teaching of undergraduate and graduate students in the creative writing program. He sees his work as an instructor as beneficial to his own work as a poet. “Teaching energizes my own work,” he says. “I know I’m a better writer from working with so many enthusiastic, talented students.”

Innovation in the Classroom
Neely, who holds an MFA in creative writing from the University of Alabama, recently integrated his innovative ideas into the classroom in a new way. The course Practicum in Literary Editing has traditionally produced the literary journal The Broken Plate. Students submit their best work from the course for publication.

However, Neely recently decided to take the publication to the next level. After acquiring funding from the Provost’s Initiative grant program and later from the Ball State ASPiRE Creative Arts program, he reinvented the journal as an international publication. Beginning with the 2008–09 academic year’s edition, The Broken Plate began accepting submissions from around the world, making it more competitive and meaningful for Ball State students to see their names in print.

Preparing Students for the Real World
In addition to gaining experience publishing their own work, students in Neely’s class gain valuable editorial experience as they work together to produce The Broken Plate. He believes it is important for students to learn to effectively edit their own work for particular audiences as well as how to critique and edit the work of others. These skills will serve students well in their own college careers and a wide variety of professions.

Neely’s efforts to help his students prepare for their professional careers have not gone unnoticed. According to former student Garrett Cox, “His constant encouragement, availability, helpfulness, and effective teaching have without doubt made me a better writer and student. He has prepared me for my future.”

Neely is currently writing a book-length collection of poems, Fishing with Lorenzo, that follow a narrative sequence.