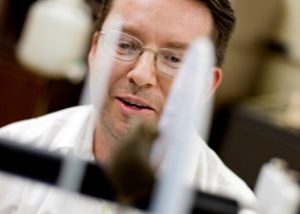 People trying to manage diabetes often have bouts of hypoglycemia, or low blood glucose levels. When this happens, they experience sleepiness, confusion, and impaired memory.

Ball State professor Bart Pederson is researching what happens to memory function during hypoglycemia, looking at the role glycogen plays.

Using test mice that have been genetically modified to be unable to produce glycogen in the brain, Pederson, assistant professor of biochemistry in the Center for Medical Education, administers insulin injections that make the mice hypoglycemic. He then compares their learning ability to a control group that has not been treated with insulin. As the two groups of mice progress through various tasks and receive different stimuli, Pederson and his graduate students record their progress. If glycogen is necessary to help them learn, the researchers theorize that the mice without glycogen won’t perform as well.

By inducing hypoglycemia in mice and monitoring its effects on learning, Pederson can make connections to glycogen’s relationship to learning and memory in humans. He hopes his research, which is funded by a $210,000 grant from the National Institutes of Health Academic Research Enhancement Program, will determine the importance of glycogen for brain function in diabetic patients, which in turn will lead to possible drug treatments to manipulate glycogen levels and better control the complications of hypoglycemia.