As bacteria become more resistant to antibiotics, staph infections are becoming more prevalent and severe. Rather than developing other antibiotics, against which bacterial strains would likely become resistant, scientists—including those from Ball State—are trying to find new drug treatments to use in conjunction with antibiotics that could protect an individual from infection. 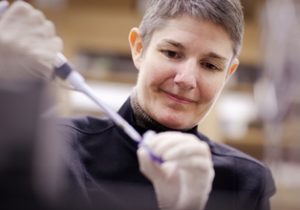 Susan McDowell’s research into connection between staph infections and statins may lead to new drug therapies for common infections.

Susan McDowell, associate professor of biology, with Ball State students at her side, is currently studying the effects of adjunctive therapeutics, as these helper drugs are called, to fight Staphylococcus aureus infections, which are the most common cause of sepsis, the tenth leading cause of death in the United States.

A Connection to Statin Drugs

Recent research in the field has revealed that hospital patients already on statin drugs, which are commonly used to lower cholesterol, and who developed a staph infection following surgery or a stay in an intensive care unit, were at a decreased risk of death compared with those not receiving the drug. When these studies were first published, McDowell was already looking at staph infections, specifically, how staph invades host cells.

Mary Horn, a student working with McDowell, performed a rather simple experiment by pretreating cells with the same dosage of statin drugs that patients would normally take, and then she infected the cells with staph. They found that the pretreated cells did not have as many bacteria as the control cells.

This new and exciting finding was published in the Journal of Pharmacology and Experimental Therapeutics, in an article written collaboratively by McDowell and her students. The research highlighted in the article was funded by multiple grants from the National Institutes of Health and the Indiana Academy of Science totaling more than $500,000.

Given that patients can develop staph infections about eight months after surgery, researchers have concluded that bacteria may lie dormant for a certain period of time. McDowell hypothesizes that if patients were put on statin drugs right before surgery, an infection might be prevented. Her ultimate goal is to develop a targeted drug that could be used with critically ill patients to treat staph infections with limited side effects.

Students at Her Side 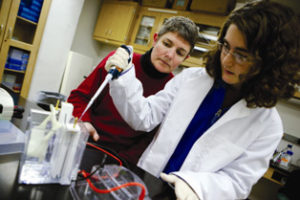 McDowell mentors students in the lab, encouraging them to ask questions and apply skills.

Central to McDowell’s work is the involvement of students. She knows the benefit of lab work for students’ education now as well as for their future career goals, and she has seen firsthand how real-world experience creates an edge for those entering the industry following graduation. To give students an advantage, classes within the biotechnology program are kept small to better help students acquire vital research skills.

“Doing work that can have such an impact on the big picture helps many students realize they have options for their futures. Seeing their enthusiasm for working on such a meaningful project has been a blast!” McDowell says.

In return, students value the leadership and support McDowell provides. “I have learned so many things, not only with experimentation techniques, but how to probe science for more and more answers,” says Traci Stankiewicz, a graduate student who worked with McDowell. “I am a stronger scientist for the knowledge she has passed down to me. She leads her students so that we will be better thinkers and will be able to apply the skills and techniques we have learned.”

With her students, McDowell will continue to probe the connection between staph infections and statins, looking for a breakthrough drug treatment.