Studying daily walls throughout our pandemic has left me both distressed and impressed: distressed, such that I recently applied for an IKEA Family credit card; impressed, such that I now kiss the refrigerator and meditate under the thermostat. I’ve imagined with my professors and peers how much more impossible this virus crisis would be if we had no World Wide Web, if the students of 2020 were instead the Franks and van Pels of a new trauma; privately, though, I’m less grateful for my Wi-Fi connection than my garbage disposal. My nightmares promise freezerless days: tears and rain thaw my Boca burgers, my poor popsicles until the whole mush melts into a sidewalk gutter. What I wouldn’t do for a Klondike bar then.

Perhaps I have a special reason to be so attached to a working twenty-first-century kitchen. You see, the house I grew up in was built during the decade before the Civil War. The family that sketched the initial structure from the earth lived in a single common room downstairs with some upstairs bedrooms—small by our standards but surely grand by their East Coast expectations, especially when you factored in the wind. When my parents were looking to buy this house 140 years later, the neighbors told them how this area, lying in a long, shallow valley, was never without a breeze. Did those White settlers of 1856 hear the same thing from the local Miami, or had the former group already pushed Indigenous people out of the state?

That breeze might have been what encouraged some subsequent owner to build the summer kitchen. I suspect it was not the first antebellum family who invested in the addition; if only because I expect youth in a building of this kind to survive in northeast Indiana (better known as Tornado Cul-de-Sac). When the weather isn’t trying to kill you out here, it can be rather pleasant, and so sometime around the turn of the century, a Hoosier husband took off his blue-ribboned straw boater hat, wiped his bushy brow, and brought his wife out to the backyard to show her a new seasonal workplace, which would, more than the indoors, offer her that Wabash County wind. 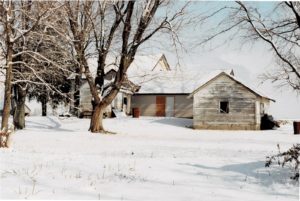 Here she could cook, clean, and can, removed from the heat of the house in the summer. Her cookstove could operate here without suffocating the main building; her Ball jars—filled to the brim with quartered tomatoes, pickled pears, plum preserves—could stand in rows on the shelves of this extra storage facility, leaving space in the main kitchen. Structures like hers were not uncommon across the Greater Midwest, and, according to the Pennsylvania Historical and Museum Commission, originated from German Pennsylvanian needs (“Summer Kitchen”). With the migration towards large gardens, orchards, and more varied techniques in meat-processing, these families could now produce most or all of their meals within the several acres they owned, a self-sufficiency that fulfilled one tenet of the contemporary American Dream. However, that meal-prepping couldn’t go on in ninety or one-hundred-degree heat without making everyone in the household miserable; thus, the summer kitchen allowed women to keep at their domestic duties without forfeiting to the particular season.

One hundred years later, the kitchen would come down. My parents saw that this building on their new property had long gone into disuse and that the previous owner had done nothing to keep it up. Not that there was any need to: in the era of Frigidaire and air conditioning, having a whole building devoted to canning and seasoning sausage during a few months of the year was quaint at best. Really, the kitchen was more defunct than an outhouse (which you’ll still see if you drive down the right road in my area). My mother and father briefly considered keeping it around for some other purpose—it was such an old building—but, in the end, they couldn’t justify having this ugly thing so close to the house, practically a step out the backdoor. By 1998, the kitchen was in splinters; I wouldn’t move into the house for another two years, still in diapers and watching Teletubbies.

Yet I seem to remember it. Maybe I’ve seen too many Walmart-processed photo albums and home video tapes. Or maybe it’s like how my sister hears ghosts in the house. The trees that were felled and the ones that never grew lift their roots where I walk. I think it’s some of all three of these that make me remember. It was all three that built the summer kitchen.

I have a good memory of making soup from scratch one autumn day with my sister, even though we’ve only ever done it once. I have a bad memory of the last time I tried to make bread, how it was so crumbly and dry that my friends wouldn’t eat it. I’ve since forgotten the recipe. If memory is a crick in the woods, the good moves the current; the bad underscores it all. This was how the kitchen was built. Though the ancestral owners of my childhood home were probably long-removed from the emigration of their families to the New World, they carried in their purses and pockets the exclusion of the royal hunting grounds, the bark and thistle that would appear on English tables, the Great Potato Famine. In America, this new generation had the right to be free from hunger (what’s that Rockwell painting?). That right extended into winter, where only memories of apples and zucchini could touch. Spending the earlier months pruning, pickling, and salting extended the life of the garden, bringing memory into the mouth long after the first frost. An original proposal for the Sixteenth Amendment was the right of Americans to remember, to relish in keeping the mind tactile, available, and imperishable. 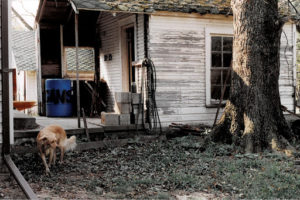 Yes, we may remember; what lies buried under our most immediate wants, however, informs our present actions. The husband who built the summer kitchen on what became the Warren homestead had likely held the memory of such buildings in his mind from visits to neighboring farms, from the boasts of the men at the Elks Lodge, from the advice in periodicals on how to preserve the garden longer. Less immediately, he had heard how President McKinley dined on tomatoes in December; he himself had dreamt of blueberry pie, only to wake up and see snow outside his window. Competition, fitting into a shifting ideal, insatiability: the mud under the water was bubbling. Endless desire becomes the real American Dream. Building the kitchen was this man building his stake in an experience that this land ought to provide him.

Fanning. Canning. Fanning while canning. Life could continue for the mother and daughters of the house with their summer kitchen. Even if they had no outward issue with the fact that their domestic duties should continue at any cost, did they have any issues with the memories which had built their building? Only thirty-some years before, slavery was legal in the Southern half of their country; the quarters that these humans lived in stood as auxiliary buildings to the master’s house. When summer kitchens first began appearing in the Midwest in the 1830s, they were contemporaneous with these slave quarters. If not direct inspiration for how a man could expand his enterprise, the model of the plantation persisted in the popular mind such that it could manifest north of the Mason-Dixon line well-removed from context.

Yet we shouldn’t necessarily peg the summer kitchen as an institution that could only keep women contained: my mother surely wasn’t thinking that as she helped to tear it down. I wonder if we can see the kitchen in the background of, or even as a point on, the timeline of feminism in America. It proved that a woman’s “separate sphere” was not just inside the house if their bodies could be liberated to this outside space. What we have, then, is a new concept for the nineteenth century: transferable domesticity. Women still needed to perform and operate under a patriarchal gaze, but now, it could repeatedly occur in their own office beyond the walls of the house. And if their roles can move places, how could they not move “spheres,” too?