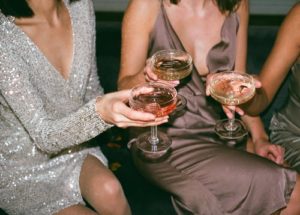 Alcohol has always been an immense part of American culture. Its influence has coated our history, and the ability to consume it has become as important to the American people as driving or voting. Indeed, alcoholic beverages are as integral to understanding societal norms and roles as any other consumed good, making it an essential, but largely ignored, aspect of food studies. While alcohol lends itself to a range of intersectional analyses, gender is perhaps the most prominent lens through which to examine the sociocultural and political implications of imbibing.

In order to fully understand the scope of our preconceived notions of different types of alcohol, we must understand the connotation that comes with them. For example, the difference between the images conjured by a person drinking a cosmopolitan and an old fashioned stem from gendered norms. The woman drinks the colorful, fruity cocktail while the man drinks the dark, spirit-forward one, and this carries over throughout every comparison to be made: craft versus generic beer, dry versus dirty martinis, light versus dark rum, red versus white wine or rosé, vodka versus whiskey. These preconceived notions can often be pleaded away to ignorance or inexperience, but this defense doesn’t quite hold up when applied to actual bartenders who have the most experience when examining what type of person would order a particular drink. In interviews conducted by Business Insider and The Tab, multiple bartenders expressed various aspects of this bias. Kyle Siegel, after nine years of experience, reported, “Basic girls always order [vodka sodas]” (Gillett). The idea of vodka as a woman’s drink is echoed by Nicola and Bobby, interviewed by The Tab,  in subtler ways, mainly by assigning pronouns in reference to the person drinking: “her mate’s birthday,” “Nice day drink with the girls,” and “She’s gonna go home” (Mussen). Similarly, darker or harder forms of alcohol were often associated with males. In reference to craft beer, Emily stated, “[the drinker’s] undoubtedly have some sort of facial hair,” an obvious nod to a masculine trait. These sentiments were likewise expressed in the bartenders interviewed by Business Insider, who referred to those who drink rum as “Frat boy[s]” (Gillett). While these alone may not indicate a trend, it is important to note that for a vast number of drinks, the bartenders remained gender neutral, overcoming a bit of the implicit bias through their years of work. Nonetheless, broader categories like cocktails and specific spirits still maintain gendered associations.

Beyond the “thing” itself, it is just as, if not more, important to analyze the method and amount in which alcohol is consumed from a gendered lens. In a study conducted by Lina A. Ricciardelli and Robert J. Williams, 179 college students were chosen from varying living conditions in order to assess “Students’ drinking, gender stereotypes, and alcohol expectancies in relation to three living arrangements” (8). Ricciardelli and Williams claim that “men have . . . been shown to be more likely than women to be influenced by pro-drinking models presented by peers whilst women are more affected by their parents who tend to reinforce a more restrained drinking style” (9). These researchers likewise concluded that men drink more in higher quantities per occasion, but that more often women were the ones to overcome gendered stereotypes and exhibit masculine behaviors during “drinking and other sex-related behaviors” (12). While these statistics may not betray the impact this kind of behavior has on societal perceptions, when compared with an article published by the Journal of Gender Studies, the impact of female drinking versus male drinking is staggering, despite the similar behavioral styles. Sara Rolando, et al. claim that “Female alcohol consumption and drunkenness have often been related to promiscuity, sexual availability . . .  and even to prostitution” (493). The disapproval is disproportionate to men whose drinking is often associated with power and masculinity. The modern media uses female addiction to “[redefine] the image of female transgression” while male addiction is often paid no attention, leading to a lack of research on the topic (494). Further, Rolando and her colleagues found that women’s drinking is more commonly associated with erotic content or simply neutral with no connotation, whereas male videos involving alcohol are typically portrayed as comedic with a low number used as warning videos and a significant percentage understood as portraits of dominance (496). The comments under the videos likewise reinforced these gendered perceptions, with the majority of respondents celebrating male drinking and denouncing female consumption.

These gendered understandings of alcohol are often used in stories to emphasize or even contradict the societal importance of the male/female binary. Examining this is perhaps easiest when looking at male figures of power. For example, in Stanley Kubrick’s iconic film The Shining (1980), Jack Torrance (Jack Nichlson) orders a whiskey at a bar. This moment signals the psychotic peak of his power, grasping onto his masculinity and holding onto it, denying his wrongdoings. He attempts to reaffirm his masculine role through the use of a traditionally masculine spirit. However, Richard Webber (James Pickens, Jr.), chief of surgery on the television series Greys’ Anatomy, is revealed as an alcoholic; the moment he breaks his sobriety is represented as weakness and a moral failing in his character. Moreover, when drinking, Webber always orders vodka, a feminine spirit that stereotypically conveys a lack of masculinity or power. In other words, the type of spirit is influenced by the arc of the character. The feminine spirit denotes weakness, while the masculine denotes strength.

However, this gendered symbolic code is complicated when taking into account wealth and class. James Bond, for one, drinks a more delicate, perhaps feminine drink, the martini, but his status as a powerful, white man who seduces many women contradicts this spirit, elevating his status by rejecting the gender binary. This is echoed by the aforementioned bartender Emily, who claims  “If a guy orders a G&T then he’s most likely well groomed, well spoken. Slightly tanned and great hair. Not tall and pretty slender. He seems classy but he’s a secret stud. He’ll finger bang someone in the corner of the club that night, heck sometimes he’ll get a threesome too” (Mussen). The assumption of power and class shifts the gender dynamics of spirit-forward feminine drinks as overtly masculine.

Gender is the single greatest influencer of the portrait of alcohol in and beyond narrative. The differences and distinctions made between the “feminine” and the “masculine” serve to highlight character depth and development and accentuate the arc of a character. They can be used to denote class and social standing all while making the differentiation between male and female powerful and present.