We have all heard of the common college student diet: Ramen noodles, pizza, macaroni and cheese, and fast food—but why is it like this? The countless number of articles on college student food that I’ve read—from Delish to university surveys to pieces on Huffpost—all describe these meals as “basic,” “cheap,” “on the go,” and “unhealthy.” From candy to chips to “instant” microwavable meals and fast food, the food palette of a college student may lead to malnourishment. This problem is derived from something known as food insecurity, which is defined by the Office of Disease Prevention and Health Promotion as “the disruption of food intake or eating patterns because of lack of money and other resources.” Across the nation, students are struggling financially to pay their debts, their rent, and other expenses, leaving little to no money to spend on quality food. Food insecurity leads to the “college student diet,” one which lacks nutritional substance and exacts a heavy toll on both physical and mental health.

To further understand food insecurity among low-income college students, it’s necessary to note that college students and teens are often the target customers for the marketing of unsubstantial foods at cheap prices. For example, ramen is a known staple of college students, a “meal” that is cheap and easy to make with a microwave. Jaewon Yoon wrote in his article “5 Things you never Knew About Ramen”) that “although [ramen] began as a luxury food, instant ramen has taken quite a turn since then. With the average packet costing a consumer only 13 cents, you could eat three square meals a day for an entire year for just $142.65…. Due to its affordability, ramen is often called ‘student food’” explaining that ramen was first released at a higher price before technology allowed it to become an “instant food,” making it an obvious choice for college students when a lack of money and motivation to cook are at hand. 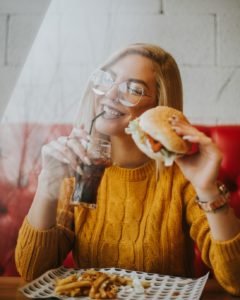 Fast food venues, another easy option for college students, often target this younger population as a cheap choice of food. The “Fast Food Target Marketing” portfolio of 2012-2013 recognized that teens, and specifically Black and Latinx youth, are the main targets of their commercials. An average of 4.8 advertisements per day are shown to teens, while Black youth were advertised “60% more calories and sodium per day . . . compared to their white peers,” and fast food restaurants funding for Spanish-speaking commercials increased by 8% and millions of dollars from 2009-2012 (Fast Food Marketing). The target market for fast food is the younger population, including college students.

Moreover, food insecurity often leads college students to consume accessible but unhealthy food. The trope of the “broke college student” isn’t a falsehood but a reality, and the normalization of this has led to unhealthy eating habits and a malnourished student body. Devon C. Payne-Sturges, Allison Tjaden, Kimberly M. Caldeira, Kathryn B. Vincent, and Amelia M. Arria conducted a recent study, “Student Hunger on Campus: Food Insecurity Among College Students and Implications for Academic Institutions,” which provides further evidence of the mental and physical impact of food insecurity on college students. The study surveyed 237 undergraduate students at a Mid-Atlantic public university on their “demographics, student status, economic factors (eg, personal and family income, financial aid), housing stability, living arrangements, academic performance, and self-rated physical health” to determine the prevalence of food insecurity and its effects (Payne-Sturges, et al. 348). The results concluded that 15% of the students surveyed were food insecure and 16% were at risk of being food insecure; it was also concluded that African American students and other students of color were at higher risk of being food insecure even with the help of financial aid, inferring that the financial aid that is often given is not enough to cover basic needs (Payne-Sturges, et al. 348).

Food insecurity not only affects students of color more than White students, but the lack of stability within food can also be connected to mental health issues, declining grades, and physical health consequences. The “Student Hunger on Campus: Food Insecurity Among College Students and Implications for Academic Institutions” study deduced that students who were food insecure, or at risk of being food insecure, often relayed that they were depressed, which, in turn, often led to academic failure as these students “… have been found to be at greater risk of not completing their studies” (Payne-Sturges, et al. 350). Along with this, the study found that “food insecure and at-risk students were more likely to report their overall health as fair, poor, or very poor and reported lower energy levels compared with food secure students”; moreover, “food insecure students were more likely to report inability to eat balanced meals (80%), eating less (69%), and being hungry (69%) because there wasn’t enough money for food during the past year” (Payne-Sturges, et al. 351).

The average “college student diet” consisting of ramen, pizza, and fast food has been normalized as students being students, but it’s bigger than that—this diet is connected to the consequences of food insecurity on groups already experiencing various forms of intersectional oppression. BIPOC students are often the target market for food with low nutritional value, which may in turn impact their educational outcomes, mental health, and physical well-being. Instead of normalizing unsubstantial meals at a cheap cost for college students, it is time to recognize the ramifications of food insecurity caused by unsubstantial living wages for college students, who should be able to “make it” with their academic, mental, and physical state intact.