Beer is one of the oldest and most popular drinks in the world. It is one of the six most influential beverages to ever exist, alongside wine, spirits, coffee, tea, and Coca-Cola. The drink is curated from cereal grains such as barley, wheat, rice, and maize, reflecting its origins in many ancient cultures all over the world. The earliest documented recipe is from ancient Mesopotamia and is written in cuneiform. It is from around 1800 BCE and  called “The Hymn to Ninkasi,” making it both a song of worship towards the Sumerian goddess as well as a brewing recipe. Meanwhile, the oldest physical evidence of beer was found in Jiahu, China from 7000-5600 BCE.

Despite contemporary masculine depictions of beer, women were behind most of the historical creations of this drink. In the legends of ancient rice beer in Chinese culture, it’s said that beer was first brewed by a woman named Yi Di, who was married to the king known as Yu the Great (Brews Brothers). This particular brand was made by chewing on the rice and spitting the juice into a bowl.

According to Dr. Patrick McGovern, a famed scholar who studies ancient alcoholic beverages, women were predominantly the driving force behind the production of beer. He states, “While men were out hunting, women were out gathering the ingredients they needed to make other foods and drink to go with the wooly mammoth or mastodon” (Nurin). One of these drinks was beer, which was safer to drink than many sources of water because the brewing process decontaminated it. Also, it had more density and caloric advantage to it, making it an essential tool for survival during periods when people might go days without a proper meal. 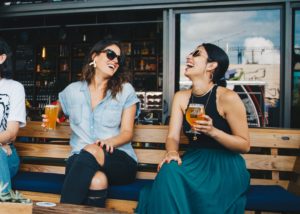 The popularity of beer spread from Egypt and the Middle East throughout Europe. In Germanic tribes, possibly as early as 800 BCE, it was produced by women using fermented honey. These same women would often brew in forests and plains to avoid raiders, such as Vikings. For several centuries, Vikings ravaged northern Africa and parts of Europe and eventually adopted the practice of making beer themselves. They called it Aul, which in time became known as “ale.” Once again, women became the sole brewers of beer, and it was as strict as law that only women were to be in charge of the brewery equipment.

This remained the case in most places where beer was popular until about the 13th century. Until then, nearly all brewers were women, and they were known as “alewives.”

If a woman had created more beer than she and her family needed and had a surplus, she would put a broomstick on the door—often topped with dried hops—to alert others that they could purchase beer there.

This sort of practice is seen across other cultures as well. For example, in Germany, a symbol known as the “brewer’s star” is commonly hung outside pubs. In Peru, it’s a flag. Their beer is called Chicha and is corn-based. Here, women make the beer as well, and they are known to have a fun time laughing at drunk men. It’s similar in Nepal, which is where the beer Chang (made from malt and rice) is produced.

You may have guessed already, but these groups of women are the historical source of the common witch tropes in Western culture. The brewsters who sold their beer to strangers in forests wore pointed hats to signify their positions, and they were known to have large amounts of herbs lying around. These women didn’t just brew beer, but they were also the healers and the cooks of their prospective communities. They had a comprehensive knowledge of plants, a cat to chase away mice who were after their grain, a boiling cauldron, and a broomstick to mark their business. It’s no question where we got the witchy stereotypes that are so common today around Halloween.

Unfortunately, around the 14th or 15th century, the act of brewing steadily moved from the household to the marketplace, and, therefore, out of the women’s sphere. In that time period, they were not allowed to handle their own businesses, and eventually women were no longer a part of the mainstream brewing profession.

The few women who continued to brew did so by the standard means. However, this was around the time that the witch hunts began in Europe, and men began conflating the symbols associated with brewsters to witches in an attempt to demonize independent women. Because of this, by 1700 women brewers had mostly vanished from European culture.

However, nowadays that standard is beginning to shift. A Standford study from 2014 shows that 4% of microbreweries in the past decade had women head brewsters (All the Swirl) and that number is only rising. Some such examples include DeVonne Buckingham from Drake’s Brewing Company as well as Irene Firmat of Full Sail Brewery. It just shows that no matter what, women are always going to be involved in and improving the craft of beer.