Many people have become familiar with the iconography of Día de los Muertos, after the success of movies like Disney’s Coco (2017), which includes sugar skulls, pan dulce, and home altars to the departed—but many people in the U.S. don’t understand exactly why it is that these specific things are important in Mexican culture. While the holiday has been heavily influenced by Catholic and American cultures since its inception, there are many aspects of it that remain true to its origins. The celebration falls on All Souls Day and All Saints Day—Catholic holidays—but its roots are firmly planted in Aztec culture. Día de los Muertos is celebrated throughout Latin America, and this Aztec history is a key part of the reason that it is most strongly associated with Mexico.

Día de los Muertos started with a belief that death was not to be mourned, but instead celebrated, as the deceased would be moving on to the spirit world. The living did not want to offend or insult the deceased with mourning or sadness; instead of mourning their deaths, their lives would be celebrated with consumables and activities that they had enjoyed. The Aztecs also believed that tears of grief and mourning “would make the spirit’s path treacherous and slippery” (Godoy and Farfán) and that, from October 31-November 2, the deceased had a brief opportunity to leave the spirit world and come visit their living relatives. This had to do with the annual migration of Monarch butterflies through Mexico in the fall, as these were believed to be the spirits of the deceased passing through to visit. 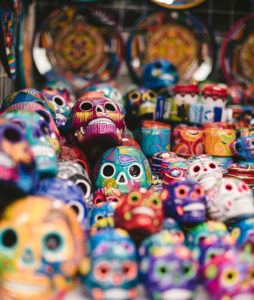 Día de los Muertos food was also important because many of these dishes and items were symbolic of the spirit’s survival and its journey into the afterlife. Sugar skulls, one of the most common icons of the holiday, are not even eaten most of the time. Instead, these are preserved and placed on the altars to the deceased as ‘ofrendas’, or offerings. The sugar skulls are decorated brightly and uniquely to represent the deceased’s individual personality as well as the vitality of life. The skull and skeleton imagery (calacas and calaveras) is also present through masks, dolls, and parades, always showing the deceased as happy and enjoying themselves.

Pan dulce, also sometimes called pan de muerto—literally “dead bread”—is another item that is  symbolic, though this is a dish that is prepared for both the living and the dead. This sweet bread is often baked in the shape of skulls or bones and is either glazed or dusted with sugar and is also placed as an ofrenda on the altars to the deceased. One purpose is to serve as nourishment for the deceased—it is believed that the journey back from the spirit world is a long one, and that the spirits will require food and drink when they arrive. This is a chief reason why food is important to this holiday—families prepare the favorite dishes and beverages of the deceased so that they have something waiting for them when they get back, and so that they can see that their living relatives still put care and love into their efforts for them. There is some debate over other things pan dulce could be interpreted as for an ofrenda—the shape of skulls and bones leads some to the conclusion that it is representative of the souls of the departed. However, some think that because of the grain ingredients with which it is made, it is instead a representation of the soil of the earth from which the souls have departed. Regardless of what it might symbolize, it is certain that it is meant as nourishment for the deceased after their journey back to the land of the living, and it is a staple among households and ofrendas for Día de Muertos.

Ofrendas and altars are an absolutely vital aspect of the celebration of Día de los Muertos. Families create the altars with photographs and candles as a way for their departed loved ones to find their way back to their living relatives, and the food and ofrendas serve both as nourishment for the deceased after their journey as well as enticement and motivation for them to come back to the land of the living. Overall, food plays a vital role in the celebration of Día de los Muertos, especially pan dulce and sugar skulls because of their symbolic associations. No Día de los Muertos altar is complete without the favorite dishes of the loved ones you hope to revisit.