Candy corn seems to always be on the shelf when the calendar strikes October, then disappears only to reappear every year like clockwork. A constant during Autumn, candy corn is a staple in most households around the time of Halloween—whether it’s to munch on in the bowl on the counter, to distribute to trick-or-treaters, or even, in some cases, to avoid because of its sugary consistency. Candy corn has survived through generations, adapting in style, but still maintaining the recipe passed down decades earlier. The use of adaptive marketing has resulted in candy corn’s longevity through the ages, and its future presence in homes today. 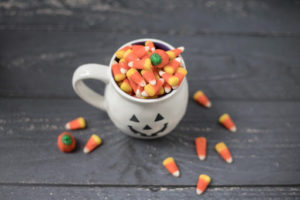 Candy corn was first made in the 1880s by George Renninger at the Wunderle Candy Company in Philadelphia (Kawash). It was the start of the Second Industrial Revolution that lasted until the start of World War II, and the production of chocolate, butterscotch, and of course candy corn was part of this increase in manufacturing and innovation.

During the 1880s, candy corn was made through a process that required many people. The ingredients that make up the treat are mainly sugar, corn syrup, fondant, and marshmallow, cooked together until smooth in large kettles. There were, “Men called “stringer” [that] walked backwards, pouring the candy into cornstarch trays imprinted with the kernel shape”; this was done multiple times in order to create the layered look (National Confectioners Association). Candy corn’s layered image of yellow at the bottom, orange in the middle, and white on top became its signature look. However, the system that initially produced the candy has changed over time, with machines now doing most of the work.

Funnily enough, candy corn was originally advertised as chicken feed to people around the United States. The logo was a rooster crowing into the air, with what seemed to be candy corn surrounding him. The words, “Something worth crowing for” was sprawled out next to the rooster. The motto “King of the Candy Corn Fields” indicated that the company was trying to advertise to the population of farmers in and around the midwestern United States (Kawash). 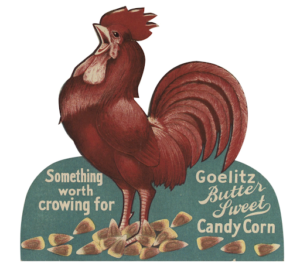 Over time, this marketing emphasis on farming and chickens has shifted to Halloween, and the candy’s orange and white coloring has made it appear to be a natural part of fall decorations. Indeed, October 30th is National Candy Corn Day, the day before one of the biggest holidays revolving around candy. The company that now produces candy corn, Jelly Belly, also markets the candy beyond the Halloween season, introducing flavors such as S’mores, Patriotic Raspberry Lemonade, Classic, Caramel, and even Turkey Dinner. The candy is even used as decoration for a variety of other desserts.

Candy corn has persisted for generations through the use of adapting advertisements and marketing plans. Originally, the candy was sold to the rural areas of the United States through the use of roosters. Then, because of the associative color and popularity during Halloween, candy corn became indelibly associated with this holiday. Jelly Belly is still adapting by creating new flavors to market to new generations to come. However, the use of nostalgia is a key factor in the popularity. Candy corn has been a staple in most houses for generations, and both its nimble marketing and ability to evoke memories of days gone by ensure its longevity through the ages.