Heeeeeeeeere’s…Jack? Johnny? How does that line go?

Avid fans of Stephen King’s The Shining and Stanley Kubrick’s renowned adaptation of the novel are probably familiar with many of the innumerable differences between the two, including the protagonist’s name change from John Torrance to Jack Torrance. Of course, these fans are probably also aware that the enduring line quoted above was improvised by Jack Nicholson, who was referencing Ed McMahon on the Tonight Show with Johnny Carson, not his book counterpart. Moreover, the character’s nickname (but not legal name) in the novel is also Jack (“The Shining: 10 Big Differences”). Minor differences such as these ultimately do not matter, but a meaningful exploration of some of Kubrick’s other alterations illuminates the ways in which misogyny and racism negatively influence the conventions of horror. Moreover, the absence of Jack’s debilitating alcoholism haunts the film by shutting down productive discourse over such a stigmatized disease.

Kubrick’s other, significantly more dramatic alterations detract from the tragedy and meaning of the novel—much to King’s irritation. The legendary master of horror has infamously stated that he despises Kubrick’s film and remains baffled as to why the public enjoys it. Many of King’s complaints are legitimate, including the claim that Kubrick’s treatment of Wendy Torrance, Jack’s wife, was excessively misogynistic (“Stephen King Just Went Off”). Indeed, the film continues the long history of depicting women in horror as shrieking, helpless two-dimensional characters. Just take a look at the scene where Wendy confronts Jack with a bat and asks to take Danny, their son, to the hospital.  Barely holding the bat, Wendy uncontrollably sobs, shakes, and meekly swings at her deranged husband. She has little agency of her own and escapes not by fighting back but by running away. In the novel, by contrast, King presents Wendy as an independent, capable woman who repeatedly saves Danny from Jack single-handedly. Kubrick, and by extension the male-dominated genre of horror more generally, seemingly finds thrill in helpless women, revealing the desire of the male imagination to place women in a weaker position, in turn elevating men to a position of superiority and capability. Indeed, through constructing femininity as weak, masculinity can be defined as dominant. 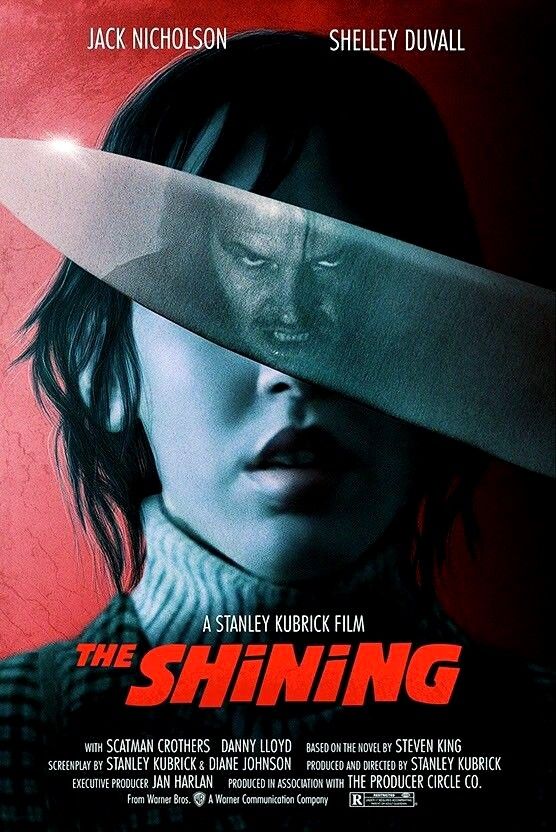 The divergences don’t stop there, nor are they any less problematic. Dick Hallorann, the Overlook Hotel’s black chef, plays a minor yet significant role in the story. In both the film and novel, Dick returns to the hotel after communicating with Danny through their “shine,” the titular psychic ability that allows those who possess it to see things that aren’t there, as well as to telepathically communicate to others with the shine. Dick becomes the hero in the novel, helping rescue the duo and ensuring their subsequent safety and healing. Conversely, in the movie Jack murders Dick almost immediately after Dick arrives at and enters the Overlook Hotel to rescue Wendy and Danny (Reimann). Aside from dramatically altering the plot, Kubrick’s decision to kill Dick continues the long history of racism in horror movies where the character of color always dies, usually by gruesome means. Indeed, the only character of color in the original story was reduced from an indispensable savior to a cheap jump scare for no truly justifiable reason. The twisted nature of white masculinity requires constant reassurance, and white male filmmakers such as Kubrick effectively construct people of color as dispensable and marginal to absolve white men from discriminatory behavior.

Perhaps the most substantial difference is the film’s treatment of Jack’s destructive, consuming alcoholism (Reimann). The novel is immensely concerned with Jack’s struggling journey into sobriety, and much of his descent into madness is symbolic of the gripping addiction that possesses alcoholics and makes recovery as elusive as a ghost. Much of the Overlook haunting might then be read as the haunting presence of alcoholism rather than as the work of simple, spooky spirits. The film, however, barely acknowledges Jack’s alcoholism, ultimately depriving Jack’s character of the majority of his struggle and arc and resorting to blaming Jack’s behavior on a simplistic possession by ghosts. The Shiningnovel offers a tragic, honest look into the tortuous battle alcoholics wage against the drink whereas the movie strives more to be a simple psychological horror story. Admittedly, nothing is inherently wrong about that; novels arguably are a better medium to explore the inner psyches of characters compared to the visual nature of cinema. The movie, however, nevertheless ignored the potential to deepen Jack’s character and utilize the horror genre to have a meaningful exploration of the complexities of what haunts individuals. Moreover, Stephen King famously endured years of addiction before sobriety. The movie’s inability to productively address alcoholism not only betrays the novel’s original purpose, but also disrespects King’s own personal struggles and experiences.

These differences ultimately strip a meaningful story about alcoholism, survival, and family down to a hollow psychological ghost story. Countless other articles have discussed these differences (here’s one that lists some differencesand a video accomplishing the same work), but these conversations lack meaningful depth. The divergences of the film from the novel are not mere creative liberties but rather speak to a legacy of white masculine control and influence. Of course, the adaption nevertheless profoundly influenced cinema and offered popular culture plenty of references that are still heard today. After all, who hasn’t seen images of Jack Nicholson’s deranged face bursting through the bathroom door with an axe, or been acquainted with, to some degree, the ominous, sprawling opening of a tiny car being swallowed whole by the forested mountains and lurking music? The Shining undeniably influenced horror as a whole, and for that I couldn’t be more grateful—or more terrified.

Flint, Hanna. “There are so many differences between Stephen King’s The Shining and Stanley Kubrick’s film.” Metro, 5 June 2015, www.metro.co.uk/2015/06/05/there-are-so-many-differences-between-stephen-kings-the-shining-and-stanley-kubricks-film-5232328/?ito=article.desktop.share.top.link. Accessed 8 Feb. 2020.

“Stephen King Just Went Off About How Much He Hates The Shining Again.” CinemaBlend, 4 Nov. 2019, www.cinemablend.com/new/Stephen-King-Just-Went-Off-About-How-Much-He-Hates-Shining-Again-68032.html?utm_source=link_share. Accessed 8 Feb. 2020.