Warning: this post contains discussion of sexual assault/violence, which may be triggering to some readers. The director, Roman Polanski, fled the United States in 1978 after pleading guilty to unlawful sexual intercourse with a minor, ten years after the making of this film.

A young newlywed couple moves into a grand apartment complex with a dark history. Guy and Rosemary Woodhouse are looking to start a family and dream of having, “three kids, one at each time,” but their new home holds many secrets (Polanski). These secrets threaten Rosemary and her unborn child’s life. The threat on Rosemary’s life reveals the horror of domesticity, the erasure of identity and abjection of pregnancy. Rosemary’s Baby exposes the terrifying constraints forced on women, destroying their individualism through sexism.

Rosemary’s Baby, directed by Roman Polanski, takes place in the years 1965-66 in a New York apartment complex. The film was released in 1968, and the novel by Ira Levin was completed in 1966. This film exposes the way sexism haunts the domestic sphere, especially during the film’s era, and explores the terror of the abject in pregnancy. The earliest residents of the apartment complex were the Trench Sisters, Victorian women who cooked and ate young children. Another resident was Adrian Marcato, a known practicing witch who was attacked by a mob and killed in the lobby of the apartment complex. Finally, in the film’s present, a Satanic cult lives in the complex, and in the course of the film this group drugs and forces Rosemary to host the spawn of Satan (Polanski). These details reveal that the Woodhouse’s destiny is already decided. The disturbing and dark history of the apartment complex shows the larger cultural anxieties that are disturbing the domestic life of the 1960s, which fuels the terror through which women are manipulated to uphold the domestic sphere. 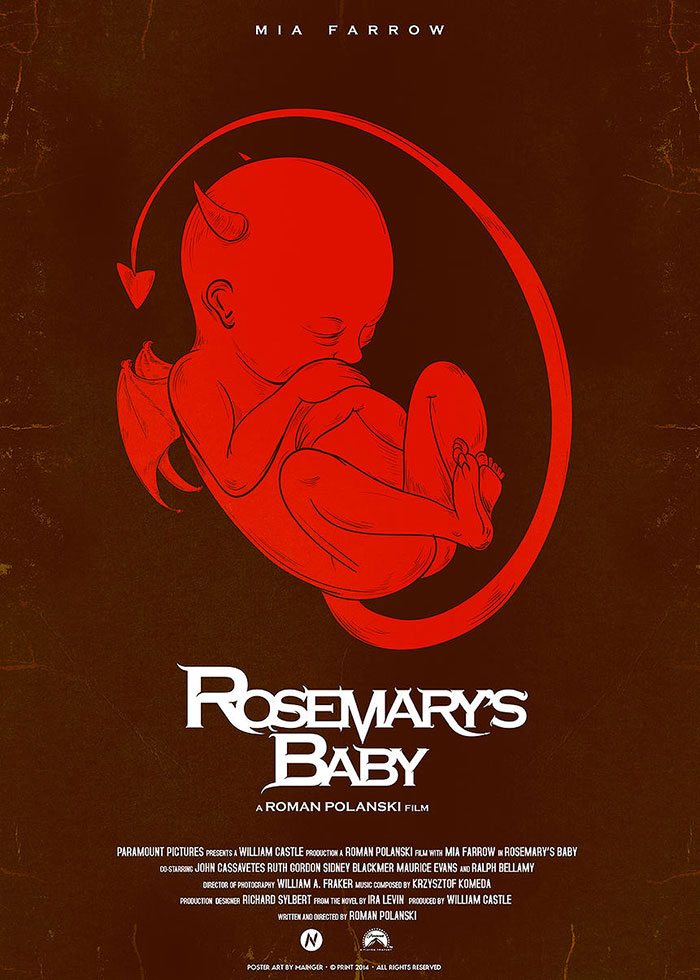 These elements in this film showcase the horrors of domesticity. Morality is a virtue expected of women, especially mothers. These expectations are attached to Rosemary, making her a target for the Satanic cult and their plans to bring Satan’s spawn into the world. Virtue and morality are common qualities of the heroine in horror movies; Rosemary is not an exception. She participates in domestic housework like cleaning, improving the home, preparing food and completing laundry. Through these chores, the audience recognizes the sexist practices and the consequences befalling women, a lack of individualism and freedom. For example, Guy Woodhouse, Rosemary’s husband, sells the well-being of his child and wife to advance his career as an actor. Rosemary does not decide to have a baby; she is raped and lied to.

Guy Woodhouse’s name reveals his role as a pawn to help the Satanic cult manipulate Rosemary to remain in her domestic role. Polanski’s adaptation explains the power structure of white middle-class domesticity. Guy was a struggling actor; as he gains popularity, he leaves Rosemary, making her vulnerable. Rosemary begins to feel abandoned. She finds comfort in other women like Theresa Gionoffro and Minnie Castavet. The women meet and chat in domestic areas of the home: the kitchen, living room, and laundry room. This film creates distinctions between men and women, husband and wife. These distinctions erase Rosemary’s identity by placing her in places where women “belong” as she maintains the female domestic sphere. Guy’s role reiterates the imbalance of power in middle-class white domesticity, where the women are abandoned and forced to maintain the home. For Rosemary, this imbalance renders her susceptible to the Satanic cult’s intrusions as well.

Rosemary’s health begins to decline in the early stages of her pregnancy. As her health deteriorates, a physical and emotional representation of the abject appears. The abject is an example of the concept heimlich/unheimlich, familiar and unfamiliar. An abject is a part of us that we try to push away, both “me” and “not me.” Rosemary’s health initiates the abject imagery in the film. Her body begins to change, and she is unrecognized by her friends; her skin is pale, and she experiences abnormal pains. These symptoms are dramatized to reveal the identity complications of pregnancy. Polanski’s adaptation highlights the horrors of pregnancy women face by exaggerating the familiar and unfamiliar, depicting the as experience uncanny.

Rosemary’s baby is abject because while the baby is within her and biologically a piece of her, the baby is not Rosemary it is an entirely different being. The baby is familiar because it reflects physical aspects of Rosemary—it is her son—yet, the baby is also the spawn of Satan, which is the unfamiliar aspect. Although it appears human, the eyes of the newborn reveal it is more sinister than assumed. Rosemary is horrified when she notices the child’s eyes and realizes this isn’t her and her husband’s child. Nevertheless, in the film she accepts the child despite knowing who the father is, showcasing how Rosemary was manipulated by societal expectations to accept the child.

Rosemary is manipulated throughout the movie to criticize the social ramifications forced on women. She is constantly lied to, manipulated, and insulted to let her guard down and conform to societal expectations. Ultimately, her acceptance of the spawn of Satan is brought by the hands of sexist ideologies and practices that haunt her. In Rosemary’s Baby, no matter how hard Rosemary attempts to regain her identity, she is pushed to conform to others’ expectations. Therefore, the film asserts, no matter how hard women attempt to escape these constructs, they are continuously manipulated, lied to, and dragged back into them.