Join us for a retirement reception recognizing the contributions and accomplishments of Scott Truex, CAP’s Department Chair of Urban Planning, on Nov. 30 at noon in the College of Architecture and Planning’s first floor atrium. 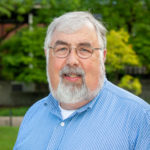 Scott Truex joined the Urban Planning department in 1986 as part of a new faculty core hired to launch a five-year Bachelor of Urban Planning Degree (BUPD). He focused on bringing his design background and community planning experiences to the classroom. Hired as an “applied researcher,” he was asked to bring his community engagement activities as a professional planner in Indianapolis and Charlotte to the classroom.

However, the foundation for this community work began as a BSU/CAP student with his mentor Tony Costello. Scott assisted Tony in creating Community-Based Projects (CBP) as an undergraduate student and then as a graduate assistant. These initiatives included CBP’s Small Town Assistant Initiative, University in Action/VISTA, and the Muncie Urban Design Studio (MUDS).

So it was a given that he would follow this student experiential learning model using CBP and the Department as the springboard to a career focus on student-centered applied learning activities.

A few of these activities included creating the BSU student Habitat for Humanity Chapter. The chapter’s success led to the development and launching of HFH national AmeriCorp Program and providing opportunities for BSU students to participate nationally in building programs with AmeriCorp members.

Scott directed over 50 community charrettes and CBP studies and guided the development of CAP’s Indianapolis Center in 2001, serving as director until 2007.

Outside the university, Scott and Dr. John Motloch founded Sustainable Communities Institute in 2012 as a non-profit  “think and do” initiative focused on the nexus of food, water, and energy to create thriving communities. Loren Deeg joined the team, which has won international design and planning awards through International Making Cities Liveable competitions for projects in Baltimore and Indianapolis. SCI helped implement urban farms and new food ecosystems in East Chicago, Elkhart, and Waco, Texas,

After CAP,  Scott will be reinvigorating the Sustainable Communities Institute to work globally on sustainability issues focused on Food Ecosystems.