For a link to watch the lecture, email caplectures@bsu.edu.
We have AICP and AIA continuing education credit for this lecture. If you would like credit, let us know when you write for the link.

Jonathan Moody’s work resides at the intersection of architecture and service—bringing transformational design to underserved communities. He believes architecture is a medium through which people can come together and participate in positive social change.

As CEO of Moody Nolan— the largest African American owned firm in the country—Jonathan is driven by a passion to continue his father’s legacy of diversifying the practice of architecture. His dedication to advancing diversity garners national attention, recently earning Moody Nolan the 2021 AIA Firm of the Year Award.  Recognized among his peers as an exceptional leader and mentor, Jonathan received the AIA Young Architect Award in 2021.

With more than 15 years of service to the practice, Jonathan’s leadership facilitates ongoing expansion of the firm, with 12 locations across the nation. Moody Nolan’s work continues to exceed industry benchmarks, receiving more than 300 design awards and citations from AIA and NOMA.  Passionate about serving his community, Jonathan works to advance education opportunities for students of color and serves as a vocal ally for communities in need. 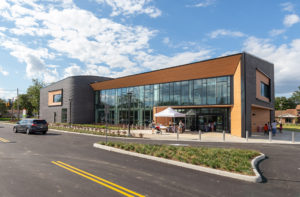 Columbus Metropolitan Library, Karl Road Branch
Jonathan’s father designed the original branch and they collaborated on the design for the new branch.

Born into a family legacy of architecture, Jonathan grew up hearing his father—a Black architect— speak about discrimination and a lack of diversity in the profession. Nearly two decades later, Jonathan faced similar struggles in higher education while pursuing both architecture and athletics. As a Black athlete, he leveraged football to pursue architecture, an opportunity to test whether architecture was his passion or family inheritance.

Upon arriving at Cornell University, Jonathan was advised that the demands of playing football and completing his B.Arch would not be possible— he could not do both successfully. Jonathan ventured to prove he could overcome adversity and model a new way of being a student-athlete of color. He played football all four years of his eligibility and became Cornell’s Scholar Athlete of the Year. He later won Cornell’s Bronze Alpha Rho Chi Medal, which recognizes graduating architecture students for leadership and service to the future of the profession.

Jonathan’s college career laid the foundation for his approach to practicing architecture. Being exposed to architecture throughout his life, Jonathan saw himself represented in the profession by his father. This representation enabled him to envision a dynamic future in the profession, something his peers without the same exposure struggled to do. This polarity of experience and the effect it had on his peers catalyzed Jonathan to realize the fullness of his architectural passion—modeling a future for the next generation of Black architects. 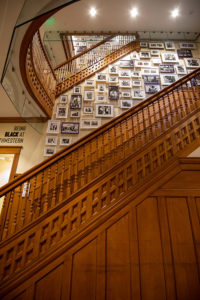 Competition.  He completed his M.Arch II from the University of California and started his professional practice in Los Angeles, before returning to Columbus, Ohio to join his father’s firm, Moody Nolan.

In 2020, Jonathan became CEO of Moody , championing the firm’s growth and service to the community. Through Jonathan’s leadership, Moody Nolan has expanded to 12 locations nationwide with 250 professional staff. More significant to Jonathan than the firm’s growth, is the firm’s impact on diverse urban communities. Jonathan believes focused efforts in these communities propel the profession toward empowering and uplifting diverse populations.

To formalize this community focus, Jonathan established Moody Nolan Cares, a community service division of the firm to track data on diversity at all levels of the firm. Moody Nolan’s growth continues to be diverse by design, with staff comprised of more than 42 percent females and 34 percent minorities — outperforming industry averages by 30 percent.

Through his career, Jonathan’s work is shaped by his commitment to serving the underserved. He regularly mentors at-risk youth and serves on local boards leading underserved community development projects. In all he does, he strives to create a more just and equitable future for all.