The CapAsia field studies program will resume in spring 2022. In preparation, we’ve asked students from past CapAsia trips — there have been ten in all! — to reflect on their experiences.

One reason I wanted to go on CapAsia was because I’d previously watched a YouTube video called “How to Cross the Street in Hanoi (Vietnam) Traffic.” Obviously, the video was about crossing the street in Hanoi and it showed a pedestrian’s point-of-view as they crossed a divided highway; it looked both horrifying and thrilling. In case you didn’t know, there are very few intersections in Vietnam and in other Asian countries that have stop signs or stop lights. Even if they do, the signs are often ignored. 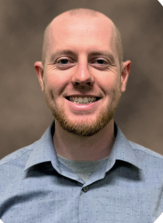 Aside from sounding like a really wild and scary experience (which it was at first!), I was also very curious to see how roadway and sidewalk space was utilized. In regards to the transportation system as a whole, I also wanted to know whether Asia should be more like the U.S., whether the U.S. should be more like Asia, a combination of the two, or neither.

Upon landing, the first thing I noticed on my ride from the airport to the hotel, was that drivers were constantly honking at each other. Though this is common in large cities across the world, in Asia, it sounded like everyone’s horn was permanently blaring. During my late night drive through the city, I also focused on the pattern of vehicle movements. I couldn’t help thinking that the streets there were just pure chaos. Motorbike drivers would constantly veer between the left and right side of the road, cars were parked on the sidewalk, and if I wanted to reach out my arm out the car window, I was close enough to other vehicles that I could easily pat a motorbike driver on the back. Doing so actually seemed appropriate given how nerve-racking driving on a little scooter must be in a city of 4.8 million people, all while a semi-truck is driving five feet behind you and a pedestrian is standing five feet in front of you.

These observations, the excessive honking and seeming lack or disregard of traffic laws, became two particular areas of interest during CapAsia. Over the course of the semester, I eventually realized that the reason for the constant honking was simply to alert other people of the presence of the driver who was honking. In Asia, sounding one’s horn seems to have much more of a practical purpose than the U.S., where honking is usually done when one driver is angry at another. Throughout the trip, I also noticed how closely vehicles drove behind other vehicles, even at higher speeds. Though slightly scary to experience at first, it felt relatively normal after the first month. Similar to honking one’s horn, nobody seemed irritated when the vehicle behind them was 10 feet away while traveling 50 miles per hour. Of course, in the U.S., this is known as “tailgating.” But, if driving extremely close to each other is normal and doesn’t cause frustration in Asia, is there even a word in their languages for tailgating? I imagine there’s probably no reason why there would be.

It has now been two years since I went on CapAsia in early 2019. Between that time and now, I’ve been working as a transportation planner in Florida and Michigan, and while I’m at work, I often reflect back to my time in Asia. Even though part of the reason I went was to figure out which transportation system was better, I still haven’t figured it out. There’s a lot to consider and research in order to answer the question, but perhaps it’s simply a question that doesn’t have an answer. 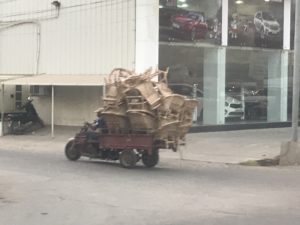 However, I at least have a better understanding than before I traveled abroad. On one hand, spending three months in Asia has made me appreciate the relative calmness of walking down even a busy city street in the States. That’s a nice thing. But on the other hand, it has made me realize that overall, the U.S. is much less creative and resourceful when it comes to transporting people and stuff, particularly given the amount of existing infrastructure.

Now, whenever I see plans to widen either a highway or even a small two-lane road, I think back to being in Asia and seeing a three-wheeled motorbike driver cruising by with 25 wicker chairs attached to the back of his bike. It makes me wonder if we should be pouring more concrete or just better using our Tetris skills.

For information about the spring 2022 CapAsia trip to Thailand, Nepal, and Russia with Profs. Nihal Perera and Tim Gray, contact Prof. Perera at nperera@bsu.edu