Featured image is of Assistant Professor Sanglim Yoo working with Sanglim Yoo with Will Snyder in the second-year studio.

Sanglim Yoo’s research involves the assessment and quantification of the interactions between human social systems and the environment, especially in urban areas with a goal of making cities better for the environment and more enjoyable for their residents.

As an assistant professor of urban planning in the R. Wayne Estopinal College of Architecture and Planning, Yoo has studied urban heat 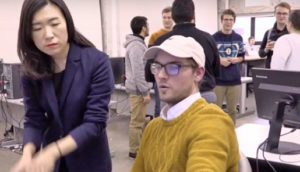 Sanglim Yoo working with Jeffery Tompkins in the second-year studio.

islands (UHIs). These are areas where temperatures are higher than in the surrounding countryside—the result of asphalt, concrete, and other materials absorbing sunlight instead of reflecting it.

“If you have open spaces such as parks and water bodies near your home, it tends to be cooler,” Yoo said of her findings. “If we can quantify how much these open spaces add to the economy in terms of heat mitigation, it could help persuade our decision-makers and builders to take a more comprehensive approach.”

Read the full story in the Ball State Magazine