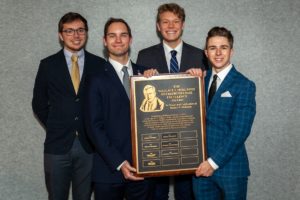 This year’s challenge was to propose and justify a redevelopment, including legal, market, financial and operational feasibility analysis, for the former Broad Ripple High School site in Indianapolis.

Their plan included high-end condominiums and the formation of a mutual benefit corporation to ensure continued public use and affordable housing of the school building itself, along with recreational open space in the back of the school and connecting trails to the Monon. The competing teams largely called for the demolition of the high school at a development plan that considered no community service and at approximately twice the cost. Faculty mentors were Prof. Bruce Frankel and Instructor Chris Palladino.

“These four brilliant and courageous students from the BUPD and RED programs beat the business school competition in all three phases of scoring: the written response, the presentation before four practitioner judges, and the voting by the audience of real estate developers and their professional support firms,” said Frankel.