Ewing H. Miller II, FAIA, a nationally recognized architect, planner and civic leader, made an enduring impact on the architecture and built environment of Indiana, and beyond. Also practicing in Philadelphia, London and Washington DC, Miller’s 50 years career included educational, corporate, housing, governmental, health, restoration/preservation and master planning projects. Forward thinking, Miller offered bold and innovative modernist design to his clients and was a national pioneer in the application of behavioral research to architectural design. His projects started with a detailed analysis of the client’s functions and needs — now a common practice – followed by high quality design with a concern for the contextual relationship with site and existing buildings.

In addition to individual buildings, Miller demonstrated strength in master planning large, complex projects beginning in 1952 with 24 American air bases in the UK replanned to accommodate the new jet aircraft and to create small towns for service members and families. He designed the University of Southern Indiana’s campus from a cornfield (late 1960’), as well as the University of San Diego Master plan. Miller’s mark remains strong at Indiana State University where he designed 31 buildings during an expansion from 4,000 to 14,000 students, as well as planning for its continued growth.

EWING MILLER’S CONTRIBUTION TO THE ARCHIVES

Ball State University’s Andrew Seager Archive of the Built Environment will play a significant role in understanding Miller’s architectural legacy. Miller donated not only his work but that of his family’s Terre Haute firm dating back to the early 20th century. In addition to Miller’s work, James T. Kienle, FAIA, Miller’s Archonics’ partner in charge of the preservation practice, also donated collections.

Miller, highly supportive of the archives, said “I believe strongly in the mission … to deepen the knowledge of the significance and quality of Indiana and the region’s built environment as well as the architectural achievements of individuals, … and their impact on the Midwest and beyond.”

Miller envisioned other architects adding their archives as resources for the future generations who study, work and live in Indiana’s built environment.

“The Architectural Archives can be an active catalyst for shaping the region’s future since the built environment is a continuum, balancing historic preservation with new concepts often influenced by earlier examples of architects and urban planners.” —  Ewing Miller

The collections can be viewed by contacting Ball State University Libraries at libarchives@bsu.edu.

Ball State had the honor of interviewing Miller and Kienle who encouraged others to build their legacy by donating their collections. Watch the interview here. 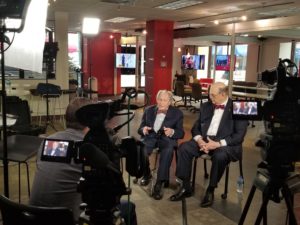 Ewing H. Miller II like his father, Ewing H. Miller, AIA, and his uncle, Warren D. Miller, FAIA, studied architecture at the University of Pennsylvania. WWII interrupted Miller’s studies and in 1942 he joined the Army Air Corp serving as a B-24 bomber pilot in the European Theater. When his plane was shot down near Vienna, Austria, Miller was the sole survivor and a POW until the end of the war when General Patton liberated the camp. He returned to the University of Pennsylvania graduating in 1948 with an MA in Architecture and Planning. Miller’s architectural accolades started in college when Louis Kahn defended his student project, awarding him an honor.

After practicing in Philadelphia and London, Miller joined his uncle’s firm in 1955 in Terre Haute subsequently forming his own firms and in 1973 co-founding Archonics in Indianapolis which grew to over 50 persons with several partners. The firm’s impact under Miller’s lead was instrumental in the revival of downtown Indianapolis through re-use of existing commercial and cultural buildings, as well as new buildings, and projects throughout the region. In 1985 HNTB acquired the firm which became known as Archonics/HNTB and Miller moved to Washington DC as the Principal in Charge of expanding the East Coast practice.

In the 1980’s, Miller masterplanned the 22 acres Indiana State Capitol Complex (Archonics) followed by the design of the one million square Government Center South Building (Archonics/HNTB). Toward the conclusion of his career, in 1989 Miller was the Principal-In-Charge of the Master Plan for Remodeling the US Pentagon.

Miller archives can be found at the Library of Congress Veterans Project; Vigo County Library; Ball State University Architectural Archives (under development), and other online outlets.