Led by Professor Jonathan Spodek, students in the Ball State College of Architecture and Planning historic preservation lab have been working on a paint color study on the exterior of several buildings at the historic Oldfields Estate on the campus of Newfields in Indianapolis. This study, which began during the Fall 2020 semester and continued into the Spring 2021 semester, focuses on the development of paint chronology at the historic barn, pump house, and double cottage in the service area of the former estate. Relatively little information is known about these buildings, though all three were listed as contributing in Oldfields’ National Historic Landmark nomination. A paint color study was completed on the Oldfields Chauffeur’s cottage in 2019.

While the exact construction dates of the three buildings are unknown, an aerial photograph taken prior to 1920 shows all three present on the site. Doors on the pump house and barn have the same unique panel and muntin pattern, hinting that they were built around the same time. The estate was developed between 1909 and 1913 for Hugh McKennan Landon, an executive of the Indianapolis Water Company, with the landscape redesigned in the early 1920s by Percival Gallagher of the Olmsted Brothers firm. It was sold to Josiah K. Lilly, Jr. in 1933 and was in the Lilly family until 1966 when it was donated to the Art Association of Indianapolis. 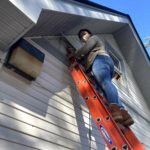 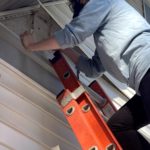 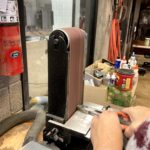 Initial preparation of the samples at the barn and pump house were cut, cast, sanded and polished for examination under a microscope. Spring semester work focused on collecting the remaining necessary samples from the double cottage and establishing the paint chronology for all sample locations. This has been an exciting opportunity to work with Newfields and for students to learn how to work with historic paint samples.