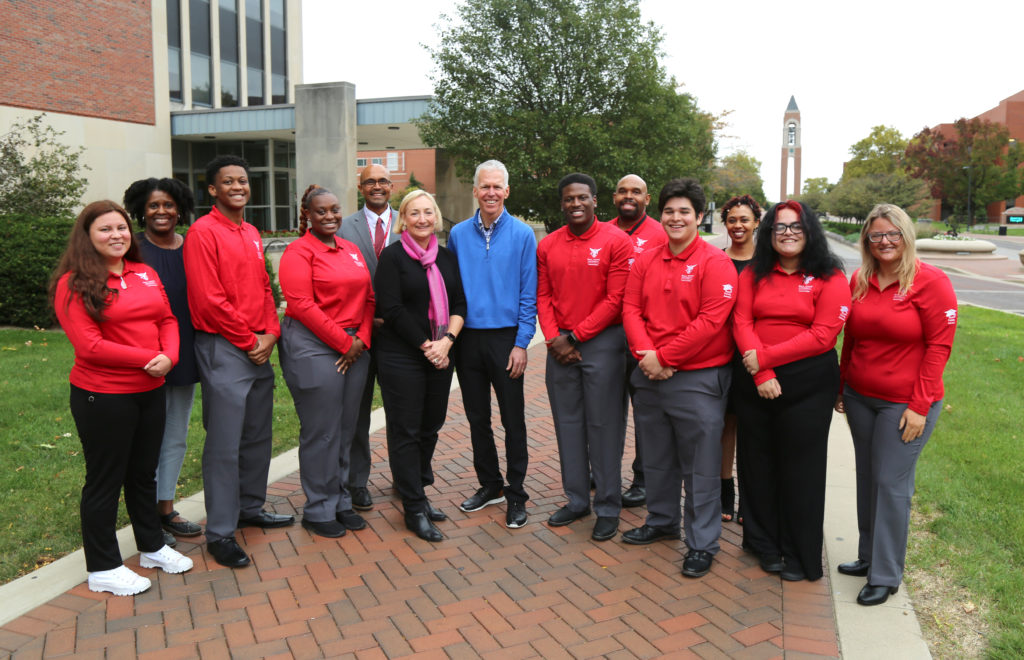 Michelle and Jim Ryan met in high school but made a conscious decision to attend different universities. Jim went to Miami University and would go on to graduate in 1980 with a bachelor’s degree in business. Michelle came to Ball State University and graduated in 1981 with a double major in elementary education and special education. 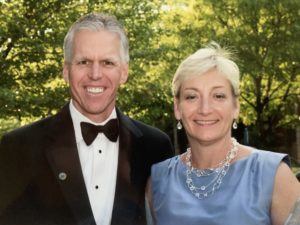 Michelle has many fond memories of her time at Ball State. She cherishes the memories she has of the two years she lived with her roommate Leslie in Wagner Hall. At the time the hall was nicknamed “the Zoo,” as it had previously been an all-male dorm (it is now part of the Indiana Academy). Michelle had a great time with her roommate, and together they experienced the 1978 snowstorm that shut down campus for a few days. Michelle still keeps in touch with Leslie, who now lives in Arizona.

She also speaks fondly of her classes and student teaching experience.

“Dr. Spencer, a special education professor, was intimidating but I learned so much from her. You did not show up for her class unprepared! I had two student teaching assignments in Muncie and loved every minute of it. Both of my student teacher supervisors were wonderful role models, and they gave me the opportunity to really take over the classroom and learn to teach.” 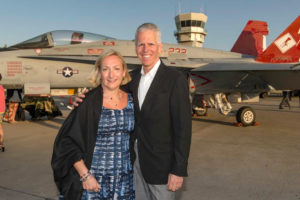 After graduating from Ball State, Michelle’s career took a different path than what she originally planned. Teaching positions were not readily available at the time due to the 1980’s recession, and when she was offered an opportunity to work with Marshall Field’s as an Assistant Buyer, she took it.  She later joined a startup organization of Federated Department Stores and became a Menswear Buyer. Always having an interest in education, she moved into training and development, which then led to a career in Human Resources with a focus on employee relations. She joined Baxter Healthcare as the Director of Human Resources supporting several different divisions as well as divestitures and mergers. 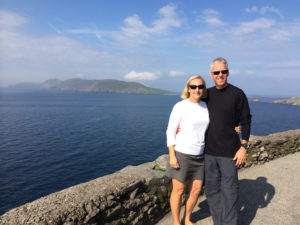 Had she and Jim not decided to start a family, she would have gone on to law school with a focus on employment law. Instead, she decided to retire to raise their two boys, Jimmy and Matthew, and became very involved in their schools. She continued to maintain an interest in education and became involved with Chicago Jesuit Academy, a boys school serving young men from the underserved areas of Chicago’s west side, which is planning on expanding its campus to add a girls school soon.

Jim began his career with W.W. Grainger, a Fortune 500 industrial supply company with operations in the Americas, Europe, and Asia. His senior roles at Grainger included serving as President, Chief Operating Officer, Group President of the U.S. and EVP of Marketing Sales and Service. He served as Grainger’s CEO from 2008-2016, as well as the company’s Chairman of the Board from 2009-2017, when he retired from the position. Jim is now an investor and advisor to growth businesses through his own venture fund and well as partnering with other venture and private equity firms. He is also the former co-chair of the Business Advisory Council for the Farmer School of Business at Miami University. 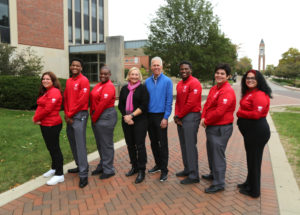 Both Michelle and Jim feel a responsibility to make a positive impact through education. They have seen the need for educators who look like the students they teach and perhaps have had some of the same experiences growing up that their students face. It was important to them to support students from underserved communities who want to become teachers so they can make an impact on their students.

“Ball State’s Teachers College offers such a strong program for future educators, so it just made sense to reach out to Ball State University with a scholarship program. However, we firmly believe that along with a scholarship, there had to be student support services available in a ‘one stop shop’ format to make it easy for the scholarship recipients to receive whatever help they may need.” 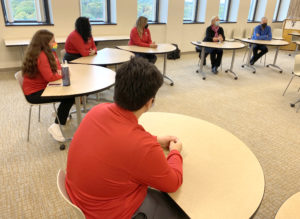 The Ryan Navigator Program, run by program director Dr. John Anderson, was set up within Teachers College to meet those needs and provide support for the scholarship recipients and other Teachers College students. Michelle and Jim were also thrilled to be able to help support the Schools Within the Context of Community Program. This program allows teacher candidates to immerse themselves within the community to better understand how to address the community’s particular educational needs. 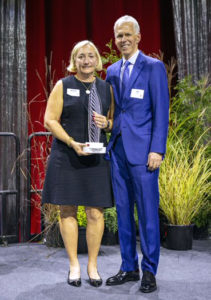 Michelle and Jim visited campus over Homecoming weekend, and they were happy for the opportunity to meet the first cohort of Ryan Family Scholars, six students who have been directly impacted by the Ryan’s gift. They had an opportunity to hear the Scholars’ stories, their plans for the future, the challenges they face as students, and how the Navigator Program is making an impact on their success at Ball State.

Later that evening Michelle and Jim were honored with a Founders Award from the Foundation at the Alumni and Benefactors Dinner hosted by the President’s Office. One of the Ryan Scholars, Bryan (Alex) Vivas, a sophomore secondary English education major, had prepared a video on the impact of the scholarship for him and his family, something that meant a lot to Michelle and Jim. 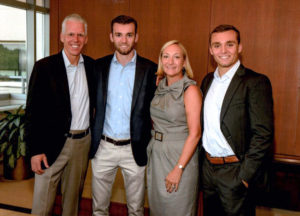 As their children grew up, Michelle and Jim were heavily involved in their schools and sports programs. Their two boys played soccer, baseball, basketball, and football, and both boys were recruited to play Division 1 sports, so they certainly stayed busy. Jim coached both boy’s baseball teams until high school, and Michelle ran PTO, Booster Club, numerous fundraisers and was a substitute teacher. Their sons have since graduated from college and are back working in Chicago. Now that Jim is retired, they split their time between Chicago and Park City, Utah. They are a very active family, and enjoy skiing, hiking, and biking. They also love to travel and experience different cultures. Jim recently completed his tenure as Chairman of the Board at DePaul University where he received his MBA, and Michelle continues to work with Chicago Jesuit Academy and the alumni through the College Persistence program.

Congratulations Michelle and Jim Ryan and thank you for dedication to education and to Teachers College!