According to Spink, the LIFT Award represents students who bring positive attitudes and new perspectives to the classroom. Nominations are typically left to the instructor, but Spink’s case was a bit different. Spink says that his class took an anonymous poll for the award. He says, “It made my semester to know that my classmates appreciated my contributions to the course.”

Spink is also a minor in Social and Environmental Justice. He believes his experience in the Honors humanities sequence has helped both his major and minor education. Of the sequence, he says, “Taking my honors humanities sequence with Dr. Hartman has been one of my best experiences here at Ball State. Dr. Hartman’s teaching style brings his students together and pushes them to succeed.”

Spink has not only received an excellent learning experience in the Honors College, but he has also received the Honors LIFT Award to help further his education. Each of the eight awardees receives a special LIFT Award frisbee and a $500 scholarship toward spring semester expenses. Congratulations to 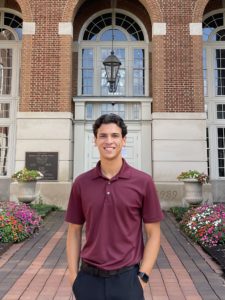