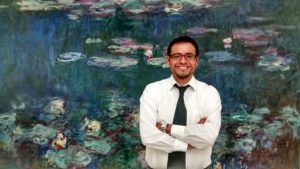 Dr. Obed Frausto earned his PhD in Philosophy of Science; Social Studies of Science and Technology at Universidad Nacional Autonoma de Mexico. Dr. Obed Frausto has completed research fellowships at Harvard University in the United States, Cardiff University in Wales, and l’Université de Paris VIII Vincennes-Saint-Denis in Paris, France. In his doctoral dissertation, he worked at the National Library of France in Paris, France and at the National Library of Mexico in Mexico City. He employed historical and sociological methods to explain and describe the political and philosophical-scientific debates in Mexico and France in the 19th Century. Dr. Frausto focuses on exploring issues related to the antecedents of philosophy of science and the interdisciplinality of natural science and social science and how these issues influence political and social problems today. His areas of specialization are sociology of science, sociology of knowledge, social theory, social studies of science and technology, French philosophy in XIX Century, Mexican philosophy in XIX Century, political philosophy, multiculturalism, and cultural diversity. Lately, he has been exploring the concept of democracy. This research is leading to the publication of a collective book: The Weariness of Democracy (accepted in Palgrave-Macmillan), where he is a co-editor. Also, he has published 10 articles/chapters in specialized scholarly journals in French, Spanish, and English. He lives in Muncie with his wife Dr. Jean Marie Place and their daughters Allison and Ava.

What benefits do you see in teaching from the honors perspective?

The Honors College captures one of the most beautiful and vital aspects of academia: the humanities. The humanitas, according to Cicero, is the flowering of wisdom, which is the art and power of thinking to promote the friendly spirit and benevolence toward every single human being without distinction. Humanities then is the art of living well and blessedly through learning and instruction in the fine arts, beginning with language and literature. Cicero was the initiator of the Western humanities tradition, which conceives that knowledge can be found in classical works by authors from ancient Rome and Greece. He promoted areas of knowledge that are important to the development of a human being, such as grammar, rhetoric, poetics, history, moral philosophy, political philosophy, and philosophy in general.

What is the goal of your classes?

The goal of my classes is to show students that humanitas should be applied to many different fields, including studies of various sciences. To properly study and teach the humanities, it is necessary that humanitas courses and studies should include a reconciliation between the humanities and sciences, a reconciliation that requires and encourages ethical and philosophical questions to be used to address scientific problems. Humanities can be helpful in environmental, health, and technology related issues, all of which we are dealing with in our current modern societies.

There is another important element that we should include in the study of humanities: learning about different cultures and societies. It is indispensable to include ways of learning about all those cultures and societies which have been dismissed and disregarded because our focus has often (almost always) centered around the European or Western tradition. We need to be open to different traditions and ways of thinking. We need to question the Eurocentrism in our humanities courses. Also, it is essential that we explore the knowledge which is bred in the experiences of marginalized people who resist capitalism, colonialism, and patriarchy. In that way, we can question and address the issues that plague our world and come about a way of achieving a more just society by more closely examining our prejudices and having a more comprehensive knowledge of marginalized people’s experiences.

How would you describe your perspective on teaching?

My approach to teaching emphasizes active learning, critical thinking, and adherence to high standards for students while simultaneously creating a supportive and friendly environment. I build writing assignments that aim to strengthen students’ abilities to ask rhetorical questions based on original texts and increase their capacity to clearly communicate complex ideas. I also strive to help students be critical consumers of empirical- and practice-based knowledge.

Are you working on any projects at the moment?

Currently, I am working on a collective book that it is called: The Weariness of Democracy: The Failure of Liberal Democracy. That book was inspired by the nightmare of the surprising triumph of Donald Trump in 2016 and a racist attack that I received when I was in Lexington, Kentucky a few days after the election. I invited different intellectuals to participate in this project to think about the implications of the victory of Donald Trump. Philosophers such as Patrice Vermeren, Fernando Broncano, and Ambrosio Velasco were willing to participate and collaborate. Also, the book contains the first English translation of important pieces of amazing philosophers, such as Miguel Abensour and Luis Villoro. My colleagues Jason Powell and Sarah Vitale are co-editors of this book, as well. In brief, this project is critical to understanding the moments of darkness in which we are living. Finally, I speak native Spanish and learned French and English as second and third languages, respectively. I grew up in a non-U.S. culture and have personal experience traveling and living around the world. Because of this international background, I am interested in designing and leading study abroad courses and advising students on different cultural and language immersion opportunities. For that reason, I designed a colloquium about the culture and history of Mexico in relation to the Zapatistas political movement. I took 11 students to my country. We visited a beautiful town called San Cristóbal de las Casas, in Chiapas, Mexico, and we had a really good time learning from the indigenous communities about their philosophy, religion, traditions, rituals, and ways of life.

What is a piece of advice you would offer your students?

I constantly invite my students to become “citizens of the world,” where their loyalty belongs to humanity, rather than any specific country. Becoming a citizen of the world begins with the recognition that human beings are different, and we can learn from each other’s differences.

What are some of your hobbies or interests?