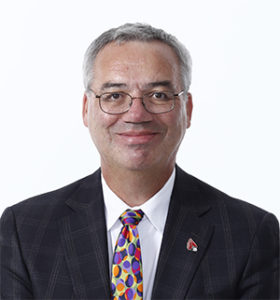 Dr. John Emert is Dean of the Honors College, appointed July 1, 2017. He joined the Ball State Faculty after earning a B.A. in Mathematics and Music and an M.S. and Ph.D. in Mathematics from the University of Tennessee.

He served previously as Chair of the Department of Mathematical Sciences and then Associate Dean of the Honors College.  Throughout the past 30 years at Ball State University he has developed several interdisciplinary Honors College colloquia linking the sciences, arts, and humanities.  He has led several Honors College field studies and directed the University’s 2011 Worcester, England Center.

He was selected recipient of the 2011 C. Warren Vander Hill Award for Distinguished Teaching in Honors Education by the Honors College students and a 2008 Access Award from Ball State University Disabled Student Development. His research efforts include work on the analysis of tangles which arise in DNA replication, the refinement of geometric algorithms used in distinguishing certain geological attributes, and the analysis of novel combinatorial competition scenarios.  He is an appointed member of the National Collegiate Honors Council (NCHC) Finance and Advocacy Committees and an official NCHC Program Reviewer.  He also serves on the Phi Kappa Phi Budget and Program Review Committee and previously chaired its Fellowship Review Committee.

In 2018 he earned the IUPUI Lilly Family School of Philanthropy Certificate in Fund Raising Management and was elected President-Elect of the Mideast Honors Association.  His life experiences also include work as a musician and published composer and home life as a proud husband and father.

What is your goal for the classes you teach?

My goal of every class is to ensure that the students are fully engaged, that they’re thinking, and that they’re challenging themselves. This comes from when I was teaching math also. They want us teaching math courses, but my objective is still there. If we only teach you how life is on the little yellow brick road, once you hit a curb, you may not even know you’re off the road. There are a lot of brick walls up there, a lot of ruts, and a lot of places without guardrails. So it’s important to be able to detect the wrong way, and you need to go back and reflect again. Something we never do in math is talk about the wrong ways to do things. It just doesn’t happen.

What do you do on the first day of a class?

Early on, many years ago, I started doing things like this. After I’ve went over the syllabus, I look them in the eye. And I say the following. “I will never lie to you for more than two days at a time.” And it generates a laugh, which is good. But it also makes a point I want the students at all times be ready for a challenge.

It is important for me to guide you gently and effectively toward the wrong way to do something. Yet I want you to be alert to to challenge when you see we’re going there.

And I do that in the honors classes that I teach because I want them to be engaged.

This goal of empowering the students to question, to ponder, and to challenge are really good skills to have no matter what they’re going into.

What is one important skill you learned during college?

One of the first papers that I did when I was in grad school, we had we had this seminar class for people in my area. And there were some stuff it was up sort of how to get to know this fairly new discipline geometric topology. It’s a mix, sort of like geometry, but not–sometimes it’s called rubber sheet geometry.

It’s where there is structure, but the structure is different than typical geometry structure. It’s  maybe 100 hundred 20 years old now. So there’s still lots to think about in there. Each year, the new first years come join the seminar. There were several papers that were really good for them to present, so that they could be thinking to themselves, “Can I really talk about this?”

There was an error in one of those papers. I discovered it as a first year before I presented it. I was reading it and thought, this doesn’t make sense. Two or three years later the newest person was doing the same thing and was also struggling. Those are really good skills to hone. Sometimes it’s good to learn how to take a perspective that doesn’t make sense to you, that you don’t agree with, that seems completely illogical to you and to try to run with it. That’s a different skill, but it’s important one. That’s what I need to bring out: to be willing to play devil’s advocate and accept other point of views. Part of that inclination probably comes from my experience in music.

How do your backgrounds in music and math connect?

Music and math have a lot in common, in that they both take the rules and try to creatively break them. That’s what makes what makes for a good composition. We don’t need another version of Mahler’s ninth, we need something that moves you from where you are to where you could be. The same is true with mathematics. We don’t need people to sit and solve quadratic formulas. We’re beyond that. We need people who can take the folklore and the presumed and challenge it.