“When I came into college, I had a very specific plan about what my life was going to be and what my career would look like. However, I quickly learned that I needed to let life happen and see where it would take me.” – Gerrad Hall

Gerrad Hall came to Ball State University with the hopes of studying TV and media to someday make it onto everyone’s local news screen. However, his journey at Ball State led him down a different path, allowing him to discover lifestyle media which eventually would turn out to be a fulfilling and successful career.

To him, the most influential part of his time at BSU was interacting with the incredible professors who had outstanding real-life experience and the connections necessary to get students involved in the professional world. In class, Gerrad hung onto every word and lesson they taught knowing that it would help him in the future. “Other places didn’t have the kind of people teaching that Ball State had. They were the reason why I chose BSU.” A few of the amazing professors Gerrad studied under were Steve Bell, Bob Papper, Nancy Carlson, and Dr. Maria Williams-Hawkins. As a student, Gerrad found taking classes in sales, business, and other areas of media helped him understand not only his field of study but also the careers of those he interacted with while on set. All of his professors also stressed writing as the most important skill anyone in the media could develop. According to Gerrad, they were right. Having a great foundation in writing is crucial for all forms of communication and storytelling.

When asked, Gerrad stated that the thing that set his education apart from his peers in the field was “that we were able to be part of daily live newscasts from our first day of freshman year.” Freshman students were thrown into these daily broadcasts with the hopes that they would learn directly from hands-on experience and the older students who acted as mentors during this time.

“The best experience ever was getting in there and doing it. Having the amazing luxury of being able to do two daily live newscasts was a priceless opportunity and gave me experience in a wide variety of skills.” – Gerrad Hall

Early Years as a Professional

After graduation, Gerrad built his resume through a variety of news and media positions. He started right after college with an amazing internship at Entertainment Tonight. From there, he got a job at Channel One News, a broadcast program for junior high and high schools throughout the country. His started here as a Script P.A. and then was promoted to Associate Producer. Here, he learned a great deal about the journalism landscape and got his first taste of what his career might look like. 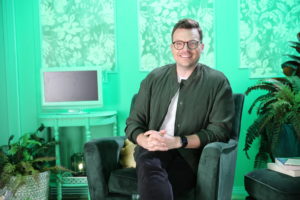 From there, he moved to a start-up titled Reelz Channel, a network dedicated to movies 24/7. He worked here for three years as a primary correspondent and eventually a rotating host of the daily movies news program, Dailies and was the main host of a weekly segment, Spotlight, a show dedicated to diving deep into a movie or celebrity. During this time, Gerrad was given the chance to travel the world and explore lifestyle media as opposed to TV news, something he discovered he had a passion for.

After the company moved headquarters and the housing market crashed, Gerrad was faced with a trying time. Thankfully, his creativity and professional skills that were cultivated at BSU allowed him to persevere and take matters into his own hands. With his roommate, Gerrad created a website to help maintain relationships with publicists and develop his skills in the budding new world of online journalism. This website turned into a successful business venture that the two of them maintained for nearly six years. In particular, Gerrad learned the key differences in the online editing of web pages and news articles compared to that of print media, which is what he was used to. All of the real-world experience he had amassed helped him to land his first job at Entertainment Weekly in 2006 as a website editor.

Presently, Gerrad is an Executive Editor at Entertainment Weekly and oversees the company’s coverage of TV, music, and awards. In addition, he hosts the daily “What to Watch” podcast. Gerrad also cohosts EW’s live Oscars, Emmys, SAG, and Grammys red carpet shows. As well, he has appeared on Good Morning America, The Talk, Access Hollywood, Extra!, and other talk shows, delivering the latest news on all things pop culture and entertainment. His day-to-day responsibilities include making decisions about what TV shows and musicians to cover, how to cover them, and how to stay in tune with what readers want and then collaborating with networks and streamers to book covers, special features, and other larger projects.

“Write! Anything you do, write it down. Turn it into a story.” – Gerrad Hall

Gerrad stated that the best thing media and communication students can do is turn everything into a story. Through this, they can practice pitching ideas and collaborate with both story subjects and other writers. Accurate storytelling is a crucial part of the journalism field and can be easy to get discouraged, but with enough practice, your story will get told. In his industry, being a good writer and editor will help young professionals go far in their careers.

For all students, Gerrad suggested that they take business courses and minor/double major in a foreign language. Business is the language of the broader world and ideas that are explored in these courses often intersect with most professional fields. Looking back, Gerrad wishes he would have taken more of these courses as he often interacts with business professionals and has to handle budgets. Additionally, Gerrad believes that as our society expands globally, being able to understand and speak a second language will be crucial in the future. Not only does minoring or double majoring in a foreign language boost a student’s resume, it helps all people learn to understand each other better and promotes inclusivity, diversity, and cultural competence.