An Indianapolis businessman has decided to honor his grandparents by growing the Ball State University scholarship fund they established in 2008.

Wade Conner and his wife, Monika, have donated $100,000 to the William and Maudames Conner Scholarship Fund, which benefits students in the Miller College of Business and the College of Fine Arts.

Wade is CEO of Trinity Metals.

“Heritage is what we received from our grandparents. Legacy is what we choose to leave behind,” Wade said. “I was very close to my grandparents and, without really being aware of it at the time, I learned a great deal from observing them and from my relationship with them.” 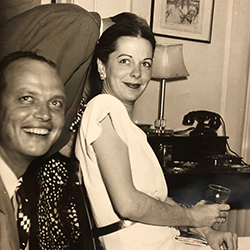 William and Maudames Conner, circa 1955

While not alumni, members of the Conner family are longtime benefactors of Ball State University. William (Bill) and Maudames owned a successful Chevrolet dealership in Muncie for 17 years. They gave $540,000 to endow a scholarship 14 years ago.

“My grandparents were generous people and they raised us to believe that we should give back to the communities where we make our living,” Wade explained.

Bill and Maudames moved to Muncie in the 1950s, after Bill returned from service in the U.S. Army in World War II, reaching the rank of Colonel and earning the Bronze Star and Silver Star.

In addition to honoring his grandparents, Wade said he was motivated to give because so many senior staff members at Trinity Metals are Ball State graduates. 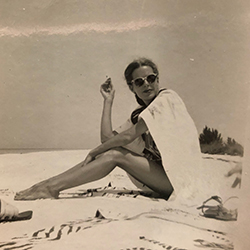 Maudames Conner at Miami Beach, circa 1955

“This is our way of saying, ‘Thank you.’ Just as our grandparents did,” he said.

Trinity Metals is a high-level recycling company. Using state-of-the-art automated technology, scrap metal that would otherwise be sold to countries overseas to be processed by hand is instead sorted and resold domestically.

Ball State is just one of several organizations that have benefited from Wade Conner’s generosity. Earlier this year, Trinity Metals teamed up with the Kentucky Colonels and Hotel Tango Distillery to help fund disaster relief after tornadoes struck western Kentucky.

To fund your favorite Ball State programs, contact or visit the Ball State Foundation at bsu.edu/foundation.