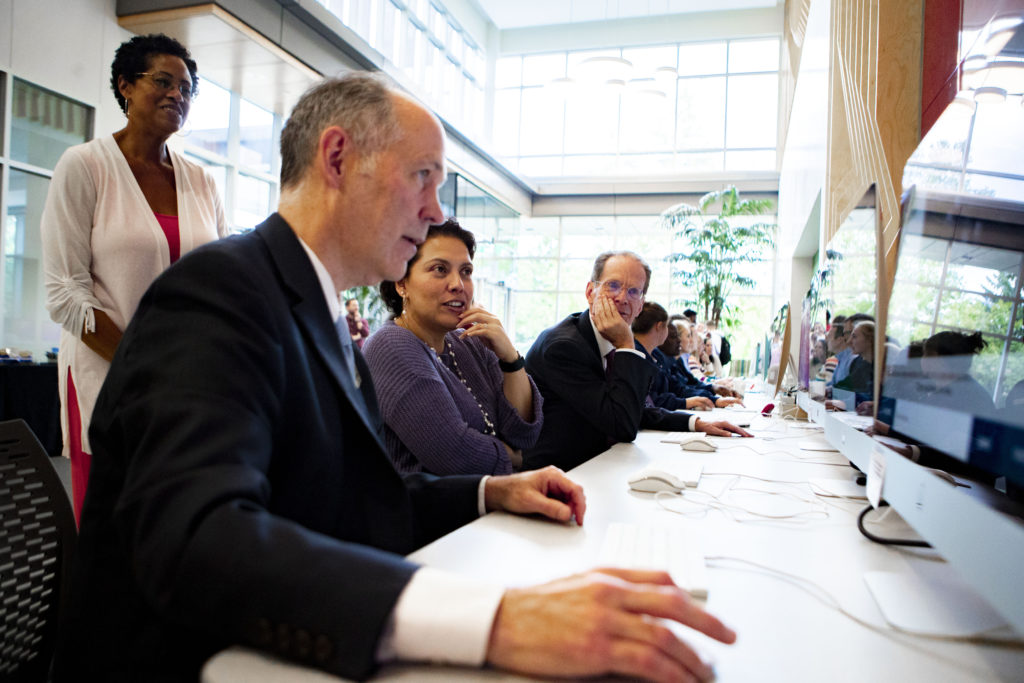 Dean Scott Rutledge, Provost Susanna Rivera-Mills and President Geoff Mearns are working as a team to save the Practitioners!

The launch of Escape! Case of the Kidnapped Practitioners was phenomenal, everyone who came to play had a great time. President Geoff Mearns, Provost Susanna Rivera-Mills, and Dean Scott Rutledge showed up to play the game, along with a team from the Ball State Foundation. Over the course of the day, a total of 22 teams would vie for the top prize, Beat’s headphones. But only a few came close to the time set by the Lightning Bolts, the third team to finish for the day with a time of just over 40 minutes. The game requires teams of three or four to play in a virtual copy of the College of Health’s Interprofessional Community Clinics. Players get to explore vital aspects of the Counseling Practicum Clinic, Speech Pathology Clinic, Audiology Clinic, and the Healthy Lifestyle Center. Game player and nursing major Kyle Hummel signed up to play because of their love of Escape Rooms and puzzles.

Team Lightning Bolts won the Beat’s Headphones with a time of 40.56.

The idea for the game came from College of Health faculty, Blair Mattern, Director of the Interdisciplinary Clinical Operations; Karrie Osborne, Director of Simulation; Lori Porter, former Director of Interprofessional Education, along with graduate student Katherine Berryhill, also created the content for the game. The technical rendering of the game was from the IDIA Lab: Institute for Digital Intermedia Arts at Ball State, who did a faithful recreation of the Interprofessional Community Clinics in the game, programmed the puzzles, and game play to bring the vision to life. The project was financially supported by a grant from the Ball State Information Technology Strategic Fund.

The game is designed to be played through in about 60 minutes, which follows timelines of real escape rooms. It has a series of puzzles to solve to rescue the trapped practitioners. Game play is targeted for a general audience, you don’t need to have healthcare knowledge to play. Though for junior Nursing Major, Ja’Kira Dickerson, her knowledge of the clinic was an asset to game play. She said, “the most fun part about the game was the fact that the health clinic in the simulation was completely accurate with the one we have access to IRL. For someone who isn’t a gamer, this helped me a lot. Home court advantage.”

Games today are mostly created to entertain, but, Dean Rutledge notes that, “Our Virtual Escape Room demonstrates the power of working in teams to increase communication and solve problems. In the case of healthcare, learning activities like this will reinforce what we lecture about – patients/clients are best served when members of an interdisciplinary team collaborate. Ultimately, morbidity and mortality arising from miscommunication will be reduced!”

While the virtual escape room is not yet available for game-play outside of structured events, the successful launch lends steam to the project for further refinements and possibly with campus partnerships making this more widely available as a team building tool across campus. If you’d like to support this program, or others within the College of Health, you can visit our website for more information. You can get a taste of the game with our sneak peek video.

Most recently, the Escape Room has gotten some major attention from the National Academies of Practice, which announced in November, the game received a Creativity in Practice Award. Congratulations to our collaborators for this major achievement.