Dean Turner and Kwesi Rogers stepped up to the free-throw line at Worthen Arena on Tuesday, February 15, to compete in the sixth annual Cardinal Deans’ Shootout during halftime of the Ball State-Northern Illinois men’s basketball game.

On the sidelines, 13 girls from West View Elementary — wearing CCIM T-shirts — chanted “Go Dean, Go” and waved pom-pons as the CCIM-duo tried to sink more baskets than their counterparts, representing Ball State’s six other colleges. Dean Turner invited the girls to attend the game, and it was “the best night ever,” said Aliyah Rehder, 11.

Since fall 2021, CCIM has partnered with West View as part of the MCS-Ball State Connections initiative, which pairs each Ball State College with an MCS school. In August, CCIM faculty and staff welcomed West View students on the first day.

CCIM Engagement Chair Kate Elliott, a lecturer of journalism, coordinated with the United Way and CCIM volunteers to give each West View student a free book as they left for winter break. So, when Elliott learned the school needed extra hands during girls’ basketball practice, she showed up.

“I played basketball in high school, and my daughter, Rose, is on the team, so I was happy to help, personally, but I also reached out to the college for support,” Elliott said.

She asked for three things from her colleagues: to attend the 3:15 p.m. games, given many faculty’s flexible schedules; to provide snacks for girls who forgot or do not have snacks, and to send in short videos of encouragement.

“Dean Turner was the first to submit a video, urging the girls to keep working hard and to believe in themselves, on and off the court. I wish she could have seen their faces when I showed them the video,” Elliott said. “Colleagues supplied snacks, including Kathy Denker, who showed up with a 64-pack of granola bars, and several faculty and staff cheered the girls on at games.”

Elliott reached out to the Ball State Women’s Basketball Team, and teammates are working together to produce an encouraging video that Elliott can share with all MCS girls’ basketball coaches. “It’s amazing what can evolve from a simple ask. Our Ball State community is so generous, and that video from the team will mean so much to the girls,” she added.

The West View All-Stars didn’t win a single game this season, but that didn’t deter the girls. Elliott recalled leaving the final game, and her daughter said: “Mom, I’m having so much fun. I’ve made friends, and we’ve played better each time. That’s what matters.” 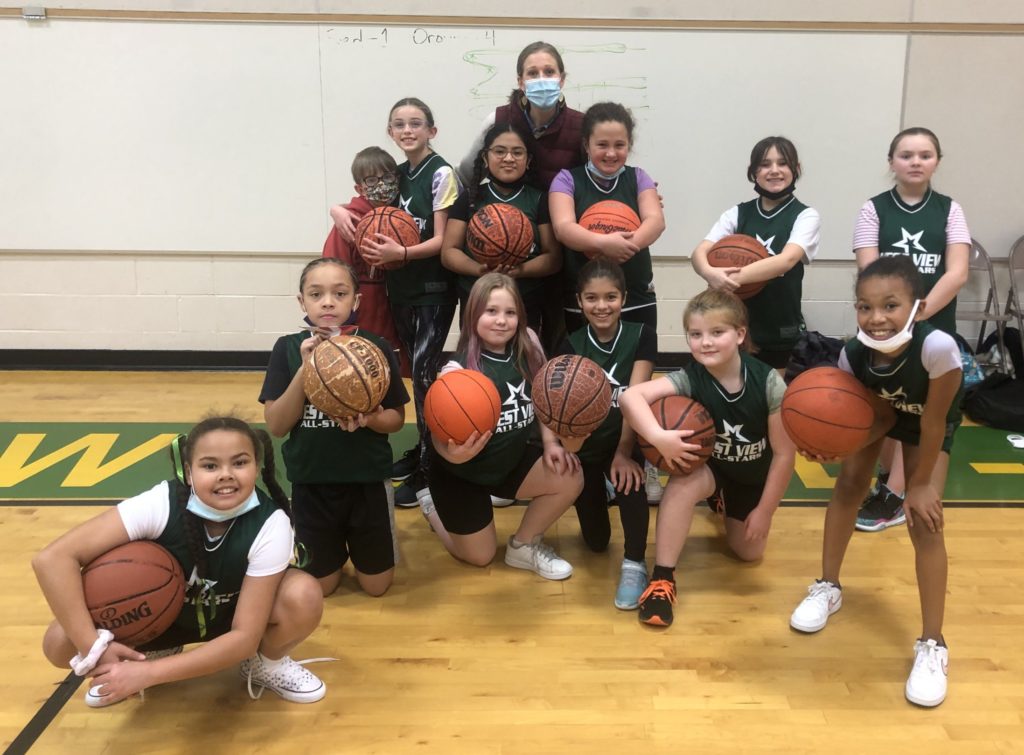 Elliott said the girls made such an impact on her, so she was “beyond thrilled” when Dean Turner approached her with the idea of getting tickets for each girl and a parent to the Dean’s Shootout game. “Earlier in the day, we lost our last game of the season, but it was so fun to end our season at an exciting game, in that giant arena,” said Natalia Bumgardner, 10. “The announcer mentioned our team, and we got to go on the court during halftime. It was amazing, and we all felt like true All-Stars.”

Dean Turner said CCIM is committed to supporting West View in grand and simple ways. In the coming months, the college hopes to kick off a Journalism Club, collaborate with West View teachers to provide professional development or present to classes. CCIM will also collaborate with the West View Parent Teacher Organization for upcoming events and teacher appreciation activities.