Meet Sara Deboer ’23, a junior majoring in Media and minoring in Screenwriting. In this blog, Sara shares her passion for filmmaking and how it’s led to numerous career opportunities. From directing films to working with the Dean, Sara has a portfolio that catches eyes, even ones from Ireland.

I’m originally from Bloomington, IN, so I grew up with IU in my life, especially their music programs. I used to play the violin before I switched paths and pursued film. I always thought music was my end goal, as that’s what fueled me through dark times, but music is a separate passion that led me to find what I’m truly passionate about which is film.

What made you decide on your major at Ball State?

It’s a cool story actually, I know Jessie Eisenberg. His wife’s mother was the founder of an organization that I worked closely with and led events for in high school. He actually lives in Bloomington and I’ve gotten to meet him on several occasions and talk about film school. This was when I was debating between music school and film school and he told me to pursue film because I had fun with it, but also could be professional with it, whereas music was more of a personal thing to me. Once I chose film school, I applied to Ball State because:

a) I wanted to get away from home.

b) It was very highly distinguished and had an amazing Media program.

c) I could afford it and be a part of many opportunities in the Honors College.

What has been your favorite class or career opportunity during your time at Ball State? 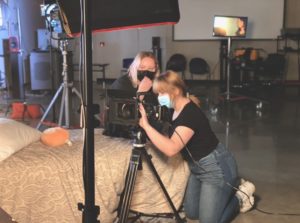 My favorite class has to be Advanced Video Production with Ben Strack. I partnered with one of my childhood friends and the two of us were given the opportunity to create a professional-looking horror film. Our film looks amazing and is being submitted to numerous film festivals and is a staple in my portfolio for directing.

How have your experiences at Ball State shaped your personal growth?

Ball State has shaped me into who I am from the numerous opportunities I’ve been given here. I work closely with the Dean, I’ve filmed for multiple different clients because of Ball State, I’ve worked closely with Ball State Marketing, I’ve had a fellowship, and have been able to make countless works for my portfolio.

Could you give us the top three projects you have worked on?

My proudest moment is when I was accepted for an internship in Dublin, Ireland (Summer 2022) and realized that I am where I want to be in the progression of my career. As well as when I realized that directing and producing are my strong suits and that that is what I want to do in the future.

Have you won any awards for your work?

Share one thing that people don’t typically know about you.

I was a competitive violinist for 12 years and have performed at the Kennedy Center, Universal Studios, as well as the French Quarter in New Orleans. I was a distinguished section member, third chair 1st Violin in high school.

My plan after college is to attend grad school for screenwriting or directing. I plan to move outside of the US; hopefully, I’ll fall in love with Dublin and move there.

My mom, Ben Strack, and my honors professor Tim Berg.

Are you involved in any student organizations at Ball State?

I am the president of the National Society for Collegiate Scholars.

What do you think is most important about Ball State?

It’s a small school with the opportunities of a large university.