Sherry Hitch is a ’92 Ball State Telecommunications alumna who specializes in visual effects. Her work is greatly recognized, receiving multiple nominations from The Emmy’s and the Hollywood Post Alliance (HPA). Currently, she serves as the Compositing Supervisor for an upcoming Lucasfilm film coming out in 2022 and has been selected as a new member for The Academy. We talked with Sherry to discuss her time at Ball State and what happened after CCIM.

What work have you done since Ball State?

Over my career, I have worked on so many various genres of films, and visual effects that are either a large part of the film, like “Star Wars The Force Awakens” and “War of the Worlds”, to smaller aspects of visual effects that are meant to help tell the story, such as the de-aging of the actors that you saw in “The Irishman” and the night zoo shots in “Mank”. I enjoy it all, and I especially enjoy totally immersing our viewers into a film; making them believe that what they’re seeing could be real.

Late last year and earlier this year, I was lucky enough to work in the pre-production phase of two Stagecraft shows (the technology that was behind The Mandalorian). That was pretty cool to work on and see how it comes together – those two shows will be out sometime next year, in 2022. Currently, I am the Compositing Supervisor for an upcoming Lucasfilm film which is due to hit theatres in July 2022. Film production started this summer, so that’s been pretty exciting. 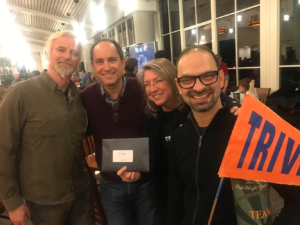 How did you find out you were invited into the Academy? What does this mean for you career-wise?

Funny story on my first thoughts, actually! I was working away, as I had pretty much done a deep dive into my work. Suddenly, my phone starts blowing up with a bunch of “Congratulations” texts, from several folks! I texted back one of those friends who is also a fellow Academy member, and asked her, “Wha? What happened? My head has been buried in work. ” Then she tells me to “ check your email right now!! ” – and boom! There it was – the Congratulatory email from The Academy, that I had been invited into the Academy! I just couldn’t believe it!!!!!! I was so excited I could barely work!!

This is such an amazing honor and I feel so humbled. Being in the Academy allows me to bring my voice to my branch of visual effects. The Academy is meant to advance the arts and sciences of the motion picture industry. A large percentage of our work comes up with solutions to challenges and pushes technology forward. I hope to help ensure we keep moving our branch forward.

Are there any courses you took at BSU that you look back on fondly or impacted your career trajectory?

Where do I begin? I feel like my film production classes were very instrumental in helping me to create and learn how to shoot and edit. Making your own video projects, with so many tools at your disposal was joyous! I also recall how easy it was to be able to check out camera equipment for the weekend. It was helpful to experiment in various ways you can shoot things; and that I certainly did that, including creating stop motion animation a few times.

I also thoroughly enjoyed my film genre classes with Wes Gehring, and I will never forget how it was the first time I had ever seen some really classic films, including cult classic “Harold and Maude”. Seeing movies in his classes and discussing them was enlightening. It made me start to look at other films in a different light.

So many things at Ball State had a huge impact on me. Not only the courses, but the extra-curricular organizations I was involved in, from learning how to broadcast and use equipment at radio station WCRD, to learning leadership skills, such as I did in the National Broadcasting Society, Alpha Epsilon Rho where I was both Vice President and President in subsequent years. Those organizations also brought many chapters across the nation together. We were going to conventions across the country and meeting industry professionals and Alumni at Ball State! They were such great experiences!

What kind of student were you while at Ball State?

I would like to think that I was a pretty good student. I really found my voice my sophomore year and started to apply myself to work in a creative capacity. While I did pretty decent in all of our required courses that I needed to take, (foreign language, math, English, etc), I really took to the courses within the Telecommunications department. That’s where I was so intrigued with all of the new equipment; it was new around the time I got to BSU. I wanted to learn as much as I could about it all.

I also had a part-time job working on campus, thanks to a David Letterman. It was an internship at VIS (Video Information System), where I had to learn computer graphics and help teachers learn how to use the system in their classrooms, so they could do their presentations.

What was your favorite place on campus?

Believe it or not, the TCOM building – it was so brand new at the time I was there, so there was still so much to get your hands on to learn. It was a very exciting time to be a student there, studying broadcast, editing, film, communication. I spent so many long, hard hours there – in fact – so much so, some of my fellow TCOM friends and I would always close the building down, because our creative juices would be flowing and we couldn’t stop working on our projects. I just had the best time!

Was there a professor that had a big impact on you?

Ball State has a great faculty and support staff. I got a lot of encouragement from just about every professor I had there. They all had a huge impact on me back then. I learned so much from them about different aspects of various industries within film, tv and radio and they listened to me, where a lot of their teachings gave me the confidence that I could go for my dreams. During my 4 years at Ball State, I look back at them all so fondly for all the encouragement (and transparency about the industry), Dr. Joe Misiewicz, Nancy Carlson, Dr. Wes Gehring, Dave Smith, Dr. Wilhelm, Dr. Richardson – and our wonderful office admin support at the time I was there, Pat Hensley.

Do you have any advice for students wanting to get into this field?

Anyone who wants to get into the field of visual effects and has a passion for creating imagery that helps to tell a story by changing the original imagery that was shot; I always say that art, photography and computer science are all really great skills to have. Many of those skills will help translate the images filmed into something more that will help illustrate your story.

So many things have changed since I was graduating from Ball State, and made the move to Los Angeles. When I moved to LA, I kept trying to find groups to get involved in, connect with fellow Ball State alums, and also meet people (like helping out on set for an Indie movie for free for the experience – which you can still do – and you start to meet folks!!). I also took extension classes from UCLA and the American Film Institute for any particular software and techniques that I wanted to learn. Nowadays there are also many helpful tips you can learn that are either offered in classes, conferences, or in attending a guest speaker panel where you can ask questions. What’s great is that so much of that learning is now all online, and some even have mentorships!

For women specifically, there are also some great groups to try and get involved with, such as Women in Film, Women in Animation, and Women in Media. There weren’t very many women doing visual effects when I started, but now, there seems to be more women coming into the field, which is great! Getting involved early on campus is also helpful, if there are any groups for women who want to embark in creative careers.

If you could meet your freshman self, what would you say?

Try and get involved in the TCOM organizations early, learn as much as you can, be patient, and don’t give up on following your dreams.