Meet Rebecca Slezak – a graduating senior from Mahomet, Illinois who majors in photojournalism.

Rebecca is a student who takes risks. She’s not afraid to step out of her comfort zone to uncover the personal stories that surround her. These past two years, Rebecca’s work has not gone unnoticed. She was awarded the Indiana College Photographer of the Year two years in a row and the Jimi-Lott Scholarship this past year, which is no small feat. It’s clear she developed her passion for photography intentionally during her time as a student.

We virtually met with Rebecca to share her unique experiences, learn about her Ball State journey, and reveal how she makes everyday stories come alive.

I’m from a small town in Illinois and attended Mahomet-Seymour high school. During my senior year, I started taking photos by being involved with the yearbook team. I didn’t know what I wanted to do after high school but I knew that I enjoyed photography. My interest quickly grew once I came to tour Ball State. Dr. Smith-Rodden was my tour guide and he really inspired me to continue my work in photography. In fact, the first time I went to take photos in college was with him at the Indianapolis State Fair. Then the summer before my freshman year at Ball State, I got involved with the National Press Photographers Association (NPPA). 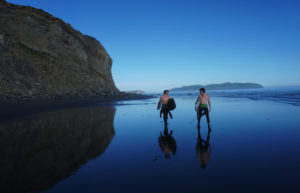 Mikey Goodman and Brayden Stevens walk up the beach after surfing in Kodiak, Alaska at three mile beach. The two have been friends since high school. Photo: Rebecca Slezak

What caught your interest in the photojournalism program at Ball State?

I took Doc’s intro class my first semester as a freshman. There, I realized by being a part of journalism, I was understanding what it meant to be human. That’s why I continue to take photos because, through these experiences, I’m learning about humanity and sharing it with others. I gathered this very early on. I think there’s so much to realize from other people. 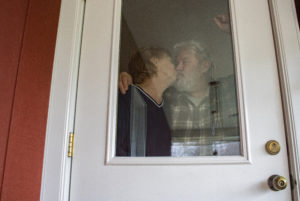 Carol and Jeff Knight share a kiss at their home in Mahomet, Ill. Both are in their late 70s. Carol expressed that they were lucky they had one another still. Their four daughters and four son-in-laws left food and supplies on their front porch and called them frequently on the phone for the following three months as COVID-19 spread throughout the United States. Photo: Rebecca Slezak

How have these experiences shaped your personal growth?

In my summer freshman year, I really got into documentary photography. I was staying at a family friend’s place and was introduced to this woman named Maria. She came from Mexico at a young age because she was scared of being sold into sex trafficking. Then she struggled with raising her three kids here in the U.S. trying to make ends meet. She got involved with prostitution and cleaned office spaces in order to feed her kids. By learning about Maria, I understood how privileged I was. That’s why I wanted to continue along with documentary work; to share different people’s life experiences.

After my sophomore year, I interned at the San Antonio Express-News and worked on a project about autism in my free time. It was great. I learned a lot about family values there.

This past year, my internship was canceled so I had to find a project on my own. My uncle, who lives in Alaska, told me about these local surfers. Within two days of talking to him, I bought my plane tickets. My parents thought I was crazy! I didn’t know anyone there. After getting off my flight, I went to the beach and ran into the surfers. The people there were wonderful. My trip was supposed to be seven weeks but I ended up extending it to eleven weeks. It was such a soul-searching project; a great reminder to take risks because they’ll pay off. I learned a lot about myself, just as I do with every project I set out on. 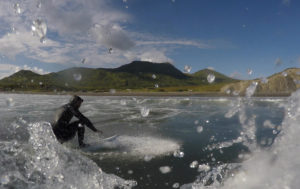 Scotty Russell surfs alone at surfer’s beach in Kodiak, Alaska. Even though Russell is in his mid 30s, he’s still stoked on surfing as if he had learned to surf that week. Photo: Rebecca Slezak

How did it feel to win the Indiana College Photographer of the Year and the Jimi-Lott Scholarship?

It’s great. However, it’s more about the journey to get there. My freshman year I wanted to be as good as the seniors at Ball State. Then my sophomore year I needed to be ranking nationally. By my junior year, I had to compete against professionals. I think it’s about pushing and holding yourself to an expectation, manifesting the goals that you set for yourself. That is what’s really important; you can achieve whatever you put your mind to. 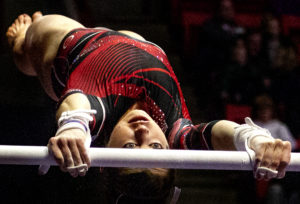 I’ve been offered two internships. For the summer, I’ll be at the Kansas City Star and in the fall, I’ll be at the Denver Post. For both of these, I’ll be doing photo and video work, along with editing because that’s something I’ve become more interested in. I got the next six months planned after graduation and that’s enough planning for me. 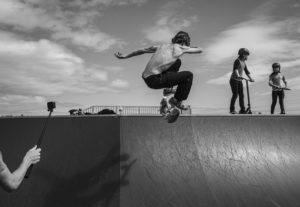 Brayden Stevens, 19, skates as his friend records him on a GoPro at Baranof Park in Kodiak, Alaska. Stevens is a well known skater in the community that can be found at the park nearly everyday of the summer when he’s not working or surfing. Photo: Rebecca Slezak

I would not be where I’m at with Dr. Smith-Rodden. He definitely needs to be acknowledged. This man has pushed me really, really hard. When I didn’t believe in myself, he believed in me. I can’t thank him enough. Doc was not just a mentor but he also became this sort-of father figure to me. He raised me as a young photographer.

The friends I met my freshman year, who are now graduated photographers, are also a great inspiration to me. They’re all really close to my heart. 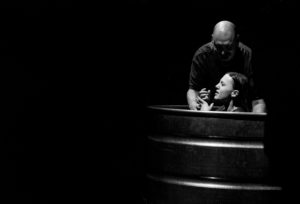 Water leaves the face of Evelyn Albaugh, 13, as she breathes her first breath as a new christian at First Christian Church in Champaign, Ill., Sunday, March 1, 2020. Lead Pastor Danny Schaffner Jr. baptized her in the middle of the auditorium of the church in a trough filled with water. Albaugh decided to get baptized after awaiting for a special moment to happen. Photo: Rebecca Slezak

What does Women’s History Month mean to you as a woman?

I think being a woman in the journalism industry can be tough. In the past, it has been a predominantly male industry. That’s not something that’s ever really scared me because I think women can do whatever they set their mind to; just because we’re female, doesn’t make us any less of a creator.

Is there anything else you’d like us to know about you?

Just work hard. Work hard to achieve. And never, ever give up.