DeHority, Botsford, Noyer, Woodworth, and more. What do these names have in common?

Two things: They are people with connections to Ball State and they have dormitories named after them.

Ball State students make countless memories in these buildings and they are near to the hearts of alumni, but few know who they are named after. While there are almost too many named halls within housing complexes to list here, below is some information on the university’s stand-alone residential facilities.

After you’re done learning about Ball State residential facilities, read about the names of our campus’s academic and administrative buildings and its athletics facilities and Shafer Tower.

Anthony Apartments is named after Harvey Mitchell Anthony, a Muncie Central High School teacher who formerly owned the land where the apartments are.

Grace DeHority was the dean of women from 1922 to 1946. Her namesake dormitory opened in 1960 and underwent a significant remodel in 2009.

Frank Elliott Ball was the son of Frank C. Ball, one of the five original Ball brothers. He died in an airplane crash in 1936 at 33 years old. Elliott Hall opened in 1937.

The Johnson complex is named after former dean of the Teachers College, Earl A. Johnson, who was a faculty member from 1929 to 1966. The complex is composed of Johnson Halls East: Botsford and Swinford Halls and Johnson Halls West: Schmidt and Wilson Halls.

Fred J. Schmidt was a professor and head of the Industrial Arts Department from 1935 to 1958. Angie Wilson was an associate professor of social science at Burris Laboratory School from 1932 to 1954.

Robert R. LaFollette was a faculty member from 1921 to 1961 as a professor and head of the Social Science Department. LaFollette opened in 1967 and housed 1,900 students in nine halls. Demolition began in phases in 2017, and now the only halls remaining are Brayton and Clevenger.

Ralph Noyer was the dean of the Teachers College from 1928 to 1952. In the early years of his time at Ball State, he was the head of the Foreign Language Department (he previously taught English and Latin). Noyer Complex opened in 1962.

Don Park was vice president for University Advancement for 14 years. He later became an Indiana state senator from 1970 to 1974. The name for this residence hall also honors the rest of the Park family, which has had at least one family member enrolled at Ball State every decade.

Scheidler Apartments are named after Lawrence J. Scheidler, a former professor of political science who was on faculty from 1936 to 1955.

The first business education professor and head of the Department of Business, Mark E. Studebaker is the person honored by Studebaker East and Studebaker West. He was on faculty from 1918 to 1954. 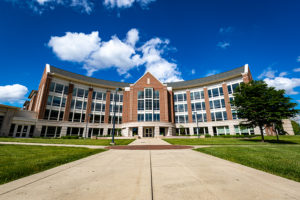 Thomas J. Kinghorn was a vice president for Business Affairs and treasurer. He served Ball State, his alma mater, for 43 years. During this time, he helped with the construction of 17 new buildings and much more. Kinghorn Hall opened in 2010.

Wagoner Complex is named after Winfred E. Wagoner, acting president of Ball State from 1943 to 1945. The building is currently used by high school students attending the Indiana Academy for Science, Mathematics and Humanities but was once home to Ball State students.

Frances Woodworth Ball was the wife of George Alexander Ball, one of the original five Ball brothers. Frances Ball contributed greatly to the cultural life in Muncie and was a patron of the arts, specifically music and painting. Woodworth Complex opened in 1956.

Explore more of the beautiful Ball State campus on our website, linked below.