We all know who the David Letterman Communications and Media Building at Ball State is named after.

But there are plenty of buildings on campus with names that honor other influential alumni and important past administrators. And sometimes those people don’t get the recognition they deserve.

Let’s take a look at our academic and administrative buildings and learn a little about their namesakes. After you are done, read about our residential complexes, as well as our athletic facilities and Shafer Tower.

This building that houses the Health Center is named after former University physician Amelia T. Wood, who served as director of the student health center from 1930-1955.

Bracken Library is named after Alexander M. Bracken, who served on the Ball State’s Board of Trustees from 1954 to 1980. He was the son-in-law of one of the University’s founders, Frank C. Ball, having married his daughter, Rosemary Ball.

The Burkhardt Building honors Richard W. Burkhardt a longtime Ball State administrator who served as the University president from 1978-79. 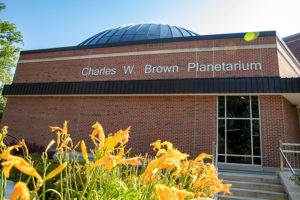 The Charles W. Brown Planetarium is the largest planetarium in Indiana. Its name reflects the philanthropy of alumnus Charles W. Brown, who graduated with a business administration degree in 1971 and has been incredibly generous to the University. Brown has a passion for science.

This facility bears the name of Robert H. Cooper. He was on faculty from 1935 to 1968 as a professor of biology and head of the Department of Biology.

Do we even have to say?

With more than 2,000 orchids, the Rinard Orchid Greenhouse contains the largest university-based orchid collection in the United States. Both Dr. Joe and Alice Rinard are alums of Ball State University. Dr. Rinard, a retired Fort Wayne dentist, gifted funds for the greenhouse to honor the memory of his late wife, Alice, who loved all things nature and beautiful. 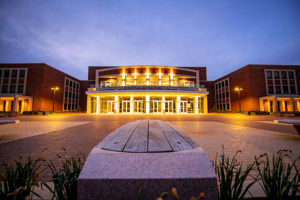 John R. Emens dreamed that one day Ball State’s campus would have a huge auditorium that could host arts and entertainment events for the Muncie community. Emens served as president of the University from 1945 to 1968. He was a critical figure in Ball State history and oversaw much of the University’s growth.

David Owsley is the son of Alvin and Lucy Ball Owsley and the grandson of Frank C. Ball, one of the original five Ball brothers. Owsley furnished the museum with his art collection of over 2,300 pieces.

Robert Hargreaves was the School of Music director from 1945 to 1981. He founded the Muncie Symphony Orchestra and served as their conductor and musical director for 33 seasons. The building that bears his name was built in 1958.

The Jo Ann Gora Student Recreation and Wellness Center is named after the University’s 14th president, who served from 2004 to 2014. During Gora’s time as president, the University experienced more than $520 million worth of construction and renovation.

The Kitselman Center is an off-campus mansion that serves as home to the Virginia B. Ball Center for Creative Inquiry. Muncie industrialist E. Faye Kitselman built the home in 1927 and his children later donated it to the University in 1956.

Lemuel A. Pittenger served as Ball State president from 1927 to 1942, after teaching for many years at other schools. He helped Ball State grow from a small school to a nationally accredited Teachers College. The student center was built in 1952. 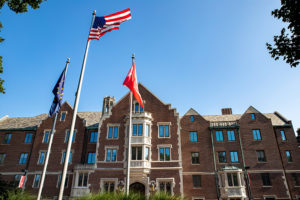 Lucina Hall served as a women’s dormitory between its opening in 1927 and 1970, when the university converted it to offices. It is named after the eldest sister of the five Ball brothers, Lucina A. Ball, who was an educator and noted writer.

The Marilyn K. Glick Center for Glass is a glass arts studio that supports the practice of contemporary glass arts. It is named after Indianapolis philanthropist Marilyn K. Glick. Construction of the center was supported by a lead gift from The Glick Fund, a fund of the Central Indiana Community Foundation established by Marilyn and Eugene Glick

The name of this 640-seat venue recognizes John J. Pruis, Ball State’s seventh president. He served from 1968 to 1978 and oversaw the construction of several critical buildings, including his namesake building, Bracken Library and the Whitinger Business Building.

Robert P. Bell served as University president from 1981 to 1984, the first alumnus to serve as president. Prior to becoming president, Bell joined the faculty as a business education professor in 1947 and then moved his way up. The Robert Bell building opened in 1984.

This hall was named after David and Mary Jane Sursa. They were both Ball State benefactors, influential arts supporters, and were heavily involved in civic organizations in Muncie. Mary Jane was a nurse who spent most of her career working at IU Health Ball Memorial Hospital, and David was a successful businessman.

Ralph J. Whitinger was a distinguished alumnus, philanthropist and founder of the Ball State Foundation. He was the founder of R.J. Whitinger and Company, an accounting firm in Muncie and Anderson. The Whitinger Business Building opened in 1979.