Had she not taken an elective course in video production in high school, Bridget-Anne Burke, graduate of Ball State’s emerging media design and development (EMDD) program, might be working with whales and other aquatic mammals. Instead, she is editorial operations trainer at CNN, instructing current and incoming employees on technical applications and operations.

Until Bridget-Anne took that high school elective, marine biology was her career quest. By the time she was a college undergraduate, her passion was for television news and fueled by opportunities to film, edit, and direct weekly episodes for her college news station.

After graduation, she worked as a professional videographer and photojournalist, before joining CNN as digital media coordinator.

While working remotely for the network at the start of the pandemic, she realized she had time to spare and began to search for master’s degrees. She knew she needed a program that was mostly online and on her schedule so she could continue full time employment.

“The interesting curriculum and topics that EMDD offered seemed like a perfect addition to my existing knowledge base,” says Bridget-Anne, who also noted, “Ball State’s program was significantly lower in cost than some of the other online programs I was looking at.”

She says the flexibility of the EMDD program was a “huge perk.” 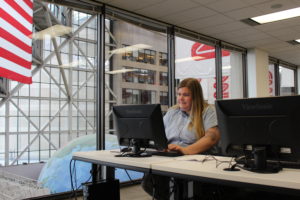 While the low-residency, mostly online EMDD program typically meets once each semester, Bridget-Anne’s cohort met only once because of pandemic precautions.

“However, when we were able to meet our colleagues in person, it was an exciting experience,” she says. “We were able to work on problems and solutions and prepare for our projects for the upcoming semester in a different way than if it had just been over Zoom.”

In one of Bridget-Anne’s projects, she served as social media manager and assistant videographer for a team of students that produced Match Point 2.0: The Rise of HCBU Men’s Volleyball, the sequel to a transmedia documentary produced the year before.

For this sequel, students used Facebook, TikTok, and Instagram for social media. In the first 100 days, Instagram registered a 14 percent increase in followers and engaged nearly 55 thousand Instagram accounts compared to the campaign for the original documentary.

“Emerging” is a key word in the emerging media design and development title, observes Bridget-Anne.

“This program is very focused on up-and-coming skills as well as current trends,” she says. “To be innovative in the areas of media and design you need to understand building blocks, but you have to be focused on the future.”

The EMDD master’s degree was designed to accommodate working professionals and distant learners.

“It is a good fit for people who are more autonomous and self-directed and empowers its participants to take more control of their learning and goals” says Bridget-Anne.

From her time in the industry, she has seen many more females in news in front of the camera, and in roles like writing and producing, but fewer working in sound, directing, editing, and filming.

“I knew that I wanted to continue in a more technical role in a larger market and city,” she says about her move to CNN in Atlanta.

Today she is preparing for a promotion to a senior trainer role. “I believe my experiences in my master’s program have made me more qualified for this promotion,” she says. “Being introduced to emerging concepts has allowed me to bring back fresh and more unique ideas to my department at CNN.”

She believes it will make a difference in her future.

“I will be able to use the knowledge and skills learned from this program for many years to come.”